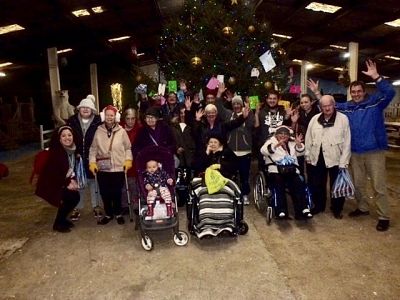 Photo: Roper House residents and carers enjoying their visit to the Reindeer centre
(click or tap image to enlarge)

Roper House is a residential facility for those who suffer from Profound Deafness and often other conditions affecting some of the elderly 27 residents. Originally Roper House was established by the Royal National Institute for the Deaf (RNID) Some two years ago the organisation morphed into a new format changing its title at the same time. It is now known as Action on Hearing Loss.

At the behest of the Community Service Committee (CSC) in June 2014 Rtn Colin McKone visited and held discussions with the part-time staff member responsible for Activities. She outlined the current needs which were for Art Materials for the Art Room, this being the most popular form of therapy for those without hearing. The CSC responded with a grant of £400 for restocking the art room with much needed supplies. In September 2014 the Committee were given 100 free tickets for Billy Smart’s Circus and we allocated 30 tickets for residents and some staff.

Shortly before Christmas a further visit was made to Roper House and they requested support for the cost of a visit to the Reindeer Centre in Bethersden Kent. The CSC allocated £ 500 to cover cost of hiring a vehicle, entry fees, and lunches. Eleven residents and some of the carers enjoyed this outing on December 19th.

Rtn Charles Evans volunteered to accompany the party to give support where needed. His report of the event contained the following:

“Although it is called the Reindeer Centre, the donkeys were definitely the star attraction primarily because they could be fed and didn’t they know it. The Roper House residents had great fun feeding them and we frequently had to return to the donkeys for further feeding with the full co-operation from the donkeys. In addition there were the usual rabbits and guinea pigs, but also goats, spotted pigs with their off spring, meerkats, a python, various birds and insects, ducks, chickens and peacocks. So quite an eclectic mixture.”

“Lunch was taken in the cafeteria followed by a prolonged visit to the souvenir shop so that the residents could make small purchases to remind themselves of the day. The trip finished around 2.00 p.m.and I think everybody enjoyed themselves and certainly there were plenty of smiles and laughter throughout the day. In case Rotary is ever short of a project it was let dropped in general conversation how much they are in need of their own mini bus, currently they have to hire one for their outings and drive it themselves.”

This proactive interaction with the Residents of Roper House is a prime example of how the Community Service Committee reaches out to some of those in need within our community.