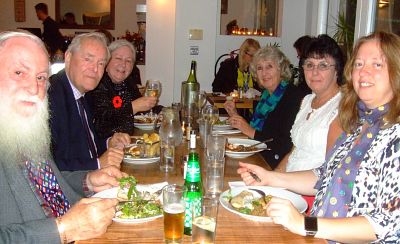 Saturday had some interesting speakers talking about topics ranging from Medical Detection Dogs, Tiggywinkles, and Young Artists, to St Christopher’s Hospice. The highlight of the day was the sketch by Minster on Sea Rotarians entitled “The Future of Rotary”, which was a light-hearted look at past, present and future membership.

Sunday dawned bright and sunny after Hurricane Brian disappeared. Again, there were many good speakers. For instance, Shaun Williamson – the actor and patron of Wireless for the Blind – gave a very humorous talk, but with a serious side, about the charity,

Rotary International in Great Britain & Ireland’s President Dennis Spiller was very thought provoking. He outlined the face and state of Rotary in Britain and Ireland. He left us all with the message that unless Rotary is prepared to change and go forward, then it is possible that club memberships will decline.

District Governor Elect Brenda Parsons and Assistant Governor Jarle Tatt gave an oversight of next year’s conference which will be held at the University of Kent at Canterbury from 7-9 September 2018. Many interesting already speakers are lined up, with Saturday afternoon left free for delegates to explore the area and visit Canterbury Cathedral or join in our Duck Race.

The Conference ended with a presentation from BBC Sports presenter Garry Richardson.