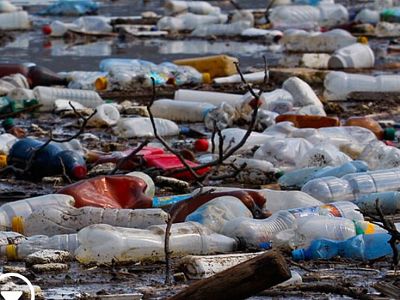 “We all produce rubbish; in this country we produce our own body weight in rubbish approximately every 7 weeks”. This was the alarming opener from Mike Webster of WasteAid when he spoke to us.

Thanks to TV programmes spearheaded by people like David Attenborough, we’re all now much more conscious of our waste – especially waste plastic. But as Mike (Chief Executive of WasteAid) says, “we’re rubbish” at dealing with our rubbish – and this is something that WasteAid wants to try and address. WasteAid is a small yet growing charity that aims to help tackle the global problem of waste.

Mike is currently based in Wye; the concept behind WasteAid was conceived in 2014 by a group of likeminded people who all worked in waste and waste management. They figured that if waste is such a hard issue to deal with in the developed world, what could be done to tackle the waste produced by rapidly developing countries elsewhere? WasteAid became a charity in 2015, and dealing with rubbish is its core aim.

Mike gave his talk the title “Where there is no binman” and spoke about the global problem of waste, especially in parts of the developing world.

However, he started by reminding us how London had suffered a massive problem with waste back in the mid-19th century. The crisis, which came to be known as “The Great Stink”, led to illnesses such as cholera, diphtheria and typhoid, and many, many associated deaths.

Back then, London was one of the few places in the world that could be described as a metropolis. Now, of course, the description applies to many global cities, and hand in hand with that growth is the growing issue of waste and its associated problems.

As Mike reiterates: “nowadays we all create waste”. But there was a time when us humans lived subsistence lifestyles, with most of our waste being easily disposed and organic. More of us now live in cities, in which the food we eat is and the items we buy are in plastic packages. More of us are consumers and, as we get richer, we consume more and produce more waste. The waste that’s produced by those of us in cities has a growing impact on neighbouring rural areas. “Waste,” Mike said, “is the effluence of affluence”! “If we think there’s a lot of plastic in the ocean now, wait until the end of the century,” he warned.

Mike gave us quite a few stats to mull over. Firstly, one person dies every 30 SECONDS in developing countries from diseases caused by rubbish and plastic pollution. Secondly, megacities are proliferating; in 1970 there were just three. In 2030 it’s predicted that there will be 41 – 32 of these will be in developing countries in which much of the rubbish, at the moment, isn’t picked up. Apparently, 3 out of 7 people around the world do not have controlled waste disposal. “That waste,” Mike said (as he showed a picture of a once rural site in Gambia, now very much within the city boundaries and surrounded by housing) “is dumped in open dumps like this”.

Even when waste is collected, the norm in many places is to dump (as above) or burn it. But organic waste that is dumped in such a manner leads to anaerobic degradation which in turn leads to the production of the global warming gas methane; meanwhile, burning rubbish causes pollution and allows toxins to escape into the atmosphere. This has a huge impact on public health as well as on the environment. For example, it’s known that children that grow up in dirty environments don’t do well. They may, for instance, grow to be stunted.

We are all now well aware of the environmental impact of waste. Most of the plastic waste in the ocean currently comes from parts of the world where rubbish isn’t collected. Uncollected waste blocks drains and watercourses (Mike illustrated this with a picture from Congo which showed a waterway totally clogged up with plastic bottles) and eventually travels out to sea.

So, the issue to address is: what can be done about waste?

One option would be to do nothing – but such a scenario actually costs 5-10 times more than implementing simple waste management! Inaction has multiple detrimental effects – e.g. on health and productivity. It can also lead to flood damage and harm both business and tourism.

Action is a better option. Rubbish pickup can support all of the UN Sustainable Development Goals (SDGs) – goals towards global peace and prosperity. And it’s essential that developing countries come on board - “You cannot grow now and clean up later,” said Mike.

WasteAid now work in parts of the world without formal waste collection. Their approach is community-led waste management and their work centres around five actions:

2)      Assess the community’s waste. (You need to know WHAT you’re dealing with before deciding HOW to deal with it).

Mike reminded us that people that work with rubbish in the developing world usually do so because they have no other option.

He gave us some idea about how WasteAid works. For instance, in the Gambia they worked with a women’s initiative; the women hadn't finished high school, but with WasteAid they are all now learning. WasteAid carried out Gambia’s first waste analysis. And then they needed to work out how they could make money from the various types of waste. Finally, they needed to decide what would make the most money for each waste type. As examples:

-          while food waste could simply be composted, it had much more value as animal feed.

-          woody waste could also be composted, but it would be worth more as cooking fuel.

-          certain plastics could be melted down, but would actually make more money as homeware or building materials.

“Basically,” Mike said, “the more the [profit] margin, the more people are interested in recycling”. "What you have to do," according to Mike, "is develop your waste value chain”. As soon as waste materials are perceived to have value, they are no longer seen as “waste”. Mike smiled as he added “there's an art to persuading someone to buy something that others are throwing away”.

Mike told us of a gentleman in Cameroon called Pierre. Pierre was a high school graduate who used to go to dumps with his mates. By melting down plastic with sand, they’d found a way to make paving slabs. Mike showed us some of the paving slabs made from plastic bags; these had been further developed by working with Imperial College in London. In countries such as Gambia, that lacks rocks, there is a good market for such paving blocks. Pierre has now trained over 4,000 people across Gambia on how to make slabs. In effect, he’d helped them to transform waste into wealth.

Mike told us of a man that used to collect plastics, bagged and piled up in his sheds. Locals thought he was crazy. But then the WasteAid team turned up and helped turn this into pavements; the following day everyone wanted some of the plastic. The man then saw an opportunity – and offered them the waste plastics – but at a price! Waste had turned into wealth and created jobs too!

Although WasteAid is still very young, it’s already having tangible impacts. For instance, it has:

Mike muses that he “doesn’t know why no-one has done this before!” Meanwhile, the young people that WasteAid work with are also coming up with innovative ideas – for instance, designing decorative slabs. In two months, they’ve recycled 1 million plastic bags!

The charity seems to be going from strength to strength but still needs support – financially, professionally and in-kind. At the moment they’re mainly supported by charities (e.g. Tearfund), individuals and some recycling companies. Countries can give in-kind support through the donation of land for their work. And right now, any funding donated is being matched by the UK government through UKAid.

All-in-all Mike’s talk was very interesting and certainly got us thinking about waste and seeing it in a new light – as a valuable resource rather than a detrimental problem.

If you want to donate to WasteAid or know more about what it does, click here.

The charity has developed an award-winning online toolkit called “Making Waste Work” that helps communities start up waste management and recycling businesses. For a summary about this, click here. (Pages 10 onwards talk about various waste materials and how they can be recycled.)

To see a video on how plastic bags can be turned into paving slabs, click here.