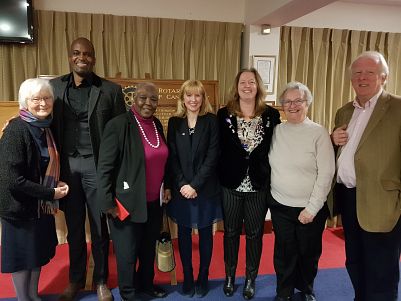 Canterbury, Whitstable & Villages MP Rosie Duffield attended our Club today to give a talk entitled “My first impressions of Westminster”.

By way of introduction, Rosie was elected as an MP in the 2017 General Election, winning the seat from Conservative Julian Brazier in what was said to be – for all shades of the political spectrum – a surprise win; this led her to become the first non-Conservative-grouped MP to represent Canterbury since its reformulation as a single-member seat in 1885. Rosie is also the first Labour MP to serve the seat, and is at present one of just over 200 women in the House of Commons. She is currently the Parliamentary Private Secretary for Dawn Butler MP. Since last September Rosie has also sat on the Select Committee for Women and Equalities; the importance of this Committee’s role has been highlighted with various stories in the press lately that touch on women’s rights and equality. It’s somewhat pertinent that Rosie came to talk to us just a few days after the country marked the time when some women in the UK first got the vote, and during the Presidency of our Club’s first ever female President, Sharon Jordan. Although Rotary is not a political organization, we are also engaged with social issues such as employment for youth and the problems of health and housing in the local area, so it was quite apt to have Rosie talk to us.

Rosie grew up in London, but has lived and worked in Canterbury for over 20 years; during this time she has been involved with all sorts of local activities, including charities.

Rosie kicked off her talk with some statistics suggesting that Parliament was becoming too full of the same type of people, and voiced her opinion that politicians need to know issues on the ground and not all be from the usual political mould. She herself was surprised with her win, knowing the history of the seat (Canterbury had the Guinness World Record for the longest time governed by the same party). Rosie reminded us of her local work as a teaching assistant and her range of other experiences over the years – even as a comedy writer. As a single mother struggling to raise two boys (now in their teens), she reflected on a period that didn’t allow much time for politics. Now Rosie hears from constituents who are struggling with debt and other crises in her surgery, and says she feels she’s doing a good job if she can help them. Knowing she has been able to make a positive difference to their lives is all the affirmation she needs in her work.

After this brief introduction, Rosie went on to list some of her early impressions of Westminster. Firstly – the endless work. “My inbox is almost always full!” she revealed. And this work kicked off almost immediately on entering her office (furnished with “old furniture and an old cord telephone”) on her first day. Rosie also told us of mice and clothes moths lurking in the building; laughingly, she told us how people often joked that “You walk in smart, and leave in tatters!”

On starting her work, Rosie soon learnt that “You can’t please everyone”, and is grateful to a long list of fellow parliamentarians who have helped her settle in and with who she’s had good interactions (several from other parties). She did, however identify a couple of MPs it was unlikely she would be sharing a tea and chat with! On that note Rosie also found it hard to get used to the boorish voices sometimes heard in Parliament: “Some men make noises more like farmyard animals!” (Rosie – and no doubt some audience members – wondered what an equivalent group of females might sound like.)

Rosie also told us of the late nights that MPs have to work – with debates often timetabled for beyond midnight, sometimes for as late as 2am. She questioned the wisdom of making important decisions at that time of day, noting how the timetable reflected a time when male MPs left their families and went off to Westminster during Parliamentary sessions. She felt it important that normal hours and proxy votes be considered if Parliament is to be more representative. Her last thought on Westminster was on how it’s not a safe place. Here, she wasn’t just referring to security – but to masonry that fell recently from the House of Commons ceiling, narrowly missing her and other colleagues. The terrible state of repair is what’s led MPs to agree to move out while the Houses of Parliament undergo a refit – a story recently covered in the press.

Rosie told us how her Westminster experience could be over at any time. Luckily she’s already stayed in longer than the man who served the shortest time as an MP – Thomas Higgins. He, unfortunately, was officially declared an MP five hours after he passed away.

In her closing thoughts Rosie told us of the importance of retaining perspective and balance, and the need to be able to deal with pressures. Finally, Rosie told us she was amazed by what WE do, referring to our support for many local causes such as the Food Bank, Catching Lives, St Nicholas School – and even for local Olympic hopeful Rachel Hanagan. She is keen to keep up with our projects, and says it’s lovely to see familiar faces when she’s working up in London.

Rosie joined us today with her fiancé Michael Anderson, a former aeronautical engineer and maths teacher who Rosie met at a Labour party meeting. The couple were engaged just before Christmas 2017. Among our audience today we were delighted to also host members of other Canterbury Rotary Clubs and their guests (as well as our members’ own guests). Rotary Club of Canterbury Sunrise will be holding a spring concert on Saturday 24 March at St Stephen’s Junior School Canterbury, in aid of the Kent Association for the Blind and Dyslexia East Kent Support.