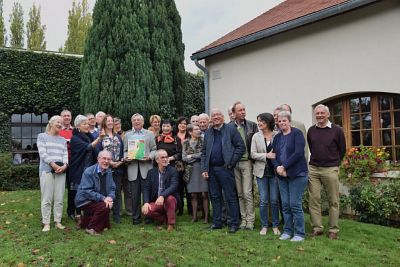 Included in our delegation was Rtn Stephen Thompson, whose grandfather John Thompson was Club President at the birth of the St Quentin Club and whose father David was President during its 25th anniversary.

Other Clubs of our Pentangular were also represented - the Leiden visitors ensured a dynamic start to the programme by providing as an aperitif for the Saturday lunch several big bottles of Genievre (40% alcohol) served in wine glasses.

At the evening dinner President Tien Le Quang spoke of the past and present of the Club (thoughtfully providing an English translation) and ended: "We ensure that all our actions, present and future, have and will have a real impact on the living conditions of needy people".

Rtn Michel Dromer was specially honoured, being the oldest member of the St Quentin Club and also a past President; he had been a spectator at the Charter Night in 1947 as a young man of 15, brought along by his father, an early St Quentin President.

After all that the dancing continued until 3 am - although the last of the UK delegation left shortly after midnight. The photos show the group present at a brunch the morning after, as well as Kellogg’s Cornflakes being consumed by President Tien Le Quang at the brunch. This recalls the first visit to St Quentin in 1947. We had asked the French whether we should bring any supplies with us, and the French Club jocularly said "corn flakes" - we took them at their word and presented a giant pack!