More than £2000 was raised at a fine dining event jointly organised by the Rotary Club of Canterbury and the ABode Hotel in Canterbury to aid the Rotary-inspired Polio Plus campaign to rid the world of the killer disease, Poliomyelitis.

The event - which was attended by 100 people from the Canterbury area - was the brainchild of Canterbury Rotary Club Vice-President, Richard Kemball-Cook, who earlier this year visited Lucknow in India as a Rotary volunteer to assist with the Polio Plus inoculation programme.  The dinner had the full support of the owner of the ABode Hotel, the Michelin starred chef, Michael Caines.  Diners enjoyed a three-course menu devised by the ABode Hotel’s executive chef, Mark Rossi which was expertly cooked by the Sous Chef of the ABode, Toby Lin. 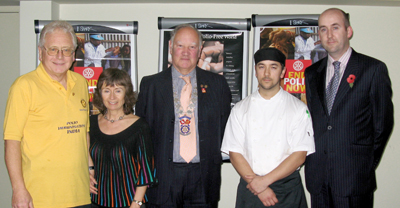 Richard said: “In Lucknow my fellow Rotarians and I joined local health workers and local Rotary Clubs in a mass mobilisation which delivered 800,000 doses in just one day.”  He added: “This event at the ABode shows that the Clubs in the UK are behind those volunteers who keep on going into the slums where this awful disease is endemic.”

Richard continued: “The money we raised at the dinner will go to buy the vaccine itself and help give the local campaigns in Pakistan, India, Afghanistan and Nigeria an important boost. Although some of the countries are making good progress, more effort is needed in Africa as the campaigns are struggling.”

Michael Caines said: “I liked this campaign as it seems well supported by local people in the affected areas. Certainly no child is safe whilst this awful disease remains active and I am glad to support this fundraising by the Rotary Club of Canterbury.”  He added: “I’m happy that this event is repeated next year.”

For more information about Polio Plus: