The Rotary Club of Canterbury has honoured two of its long-serving members with the highest award in Rotary for their outstanding service to the organisation.  Vic Banks from Canterbury was made a Paul Harris Fellow and John Sullivan, who lives in Harbledown, was awarded a Sapphire to his existing Paul Harris award.  The presentations were made by the outgoing president of the Rotary Club of Canterbury, David Barton at the final social event of his presidential year - the club’s annual Safari Supper. 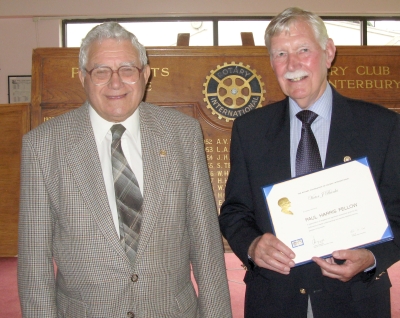 John Sullivan joined the Canterbury Rotary Club in 1976 and served as President in the 1986/87 Rotary year.  A retired heating and ventilation engineer, John fought at D-Day as part of a tank crew which helped storm the Normandy Beaches before going on to liberate Belgium.  John received his original Paul Harris Award in 2002 from members of Canterbury’s French Contact Club, St Quentin, who wanted to show their appreciation for the part John played in the liberation of France during the Second World War.  Now in his eighties, John Sullivan continues to play an active role in the life of the Rotary Club often out-shining those several decades younger than him.  He has been a member of the Club’s Council and has raised £1000 in the past year for the Aquabox project.  With his wife, Elizabeth, John recently hosted three Rotary sponsored visitors from Brazil.

Vic Banks is a retired photographic retailer and has belonged to the Canterbury Rotary Club for 38 years.  He was President in the 1978/79 Rotary year and was the driving force behind creating the Club’s mini-group exchange programme which facilitates exchange visits between young people in Canterbury and those linked with the Club’s four continental contact clubs.  Vic helped found the Canterbury Talking Newspaper for the Blind and is a long-standing member of the Club’s International Committee.  Vic is something of a polymath – he is an accomplished singer and excels at writing humorous verse to mark the Rotary members’ birthdays.

In the Canterbury Rotary Club, the nomination of Paul Harris Awards is in the gift of the president. Outgoing President, David Barton, said: “Both John and Vic have supported Rotary over many years, giving freely of their time.  Their contributions have enriched the Canterbury club immeasurably and it gave me great pleasure to recommend them for their Paul Harris Awards”, he added.

John Sullivan said he was speechless at his award.  Vic Banks said he, “was absolutely delighted”

Note to Editors
Paul Harris founded Rotary in Chicago in 1905.  The Paul Harris Fellowship is the highest honour that can bestowed on a fellow Rotarian and should be viewed as such.