Welcome, and thank you for taking time to view the website of the Rotary Club of Canterbury, Kent, England.  I’m Richard Kemball-Cook and I am the Club’s president for the 2009/2010 Rotary Year.

Firstly, a bit about me.  I’m 63 years old and I’m a chartered accountant by profession.  I retired from BT as a senior HQ financial manager in 2002.  During the Cold War years I worked for the Ministry of Defence where I specialised in procurement.  I also became an expert on government privatisations. 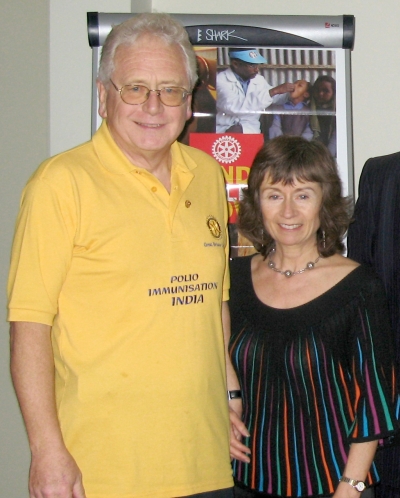 I live in Harbledown, on the outskirts of Canterbury, with my wife Cora, a well known local Yoga teacher, and have three children; Laz, Amy and Ashley.  I’m a keen sailor and belong to the Kent Sail Association where I race old Smacks – the traditional workhorses of the Kentish waters. 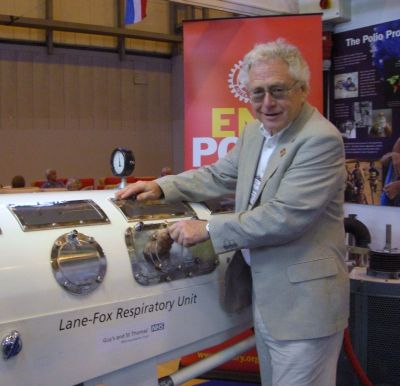 Richard with an Iron Lung on the PolioPlus stand at the 2009 Rotary International
Convention in Birmingham, England

I am passionate about the impact Rotary can have internationally and last year I visited India to take part in the Rotary-backed polio immunisation campaign – PolioPlus. Other projects I’ll be focusing on abroad include helping reduce child mortality rates in countries wracked by poverty and natural disasters by helping to provide clean water supplies and education.

But local needs will also be a priority during my year – particularly those associated with the Credit Crunch.  This is a disaster happening in our midst.  We all know people who are affected and as Rotarians we cannot let this disaster gounheeded.

In our City those who give aid are stretched to breaking point, for instance the Citizens Advice Bureau debt councillors have a six month waiting list.  So, to try and understand the needs of the local community better I am planning a conference later in the year to debate these issues and to examine how Rotary may be able to provide support.

I’m relishing my year as President.  It’s one of the oldest Rotary clubs in Britain and I am determined, with my vice-president, Robert Yonge, to maintain its high reputation.  But Rotary isn’t all about work – fellowship amongst friends is important too. 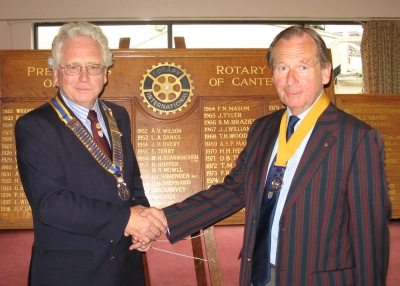 I will make it a priority to continue the excellent social and entertainment side of the club which has developed over the years.

I am immensely proud to have been become the President of the Rotary Club of Canterbury.

Click here to read the full text of my acceptance speech as President.