The Rotary Club of Canterbury has made history by electing its first ever Honorary Member for life.  The honour has gone to the immediate past Archbishop of Canterbury – Lord Carey of Clifton.

It’s traditional that the current Archbishop of Canterbury is always invited to become an honorary member of the club for the duration of their time in office, but this has to be ratified annually by club members. But the club built such a strong bond with Rotarian George, as he became known within the club during his time in office, that it was proposed to invite him to become honorary member for life, thus absolving him from the annual election.

The move actually means two firsts for the Rotary Club of Canterbury; not only has it got its first honorary life member, but it has also got two successive Archbishops as honorary members at the same time because the present archbishop, the Right Reverend Rowan Williams, is an elected honorary member.

Lord Carey’s first event as life honorary member, at which he received his accolade, was the Club’s Christmas Dinner held at Darwin College at the University of Kent. He said: “I feel tremendously honoured to have been invited to become the Rotary Club of Canterbury’s first honorary member for life. My wife Eileen, and I, have always enjoyed our visits to the club in the past and we now very much look forward to the future”. Lord Carey added: “I hope that in some small way I might be able to assist the club practically in the future through my membership”.

The president of Canterbury Rotary Club, Dr David Barton, said: “It’s a tremendous honour to have Lord Carey accept our invitation. The club was unanimous in its support of the resolution to extend his honorary membership for life.” He continued: “We are already discussing with Rotarian George the possibility of harnessing his support to help raise much needed funds for a hospital in South America. Plans are at an early stage and we hope to be able to make an announcement early in the New Year.”

Lord Carey, as well as being installed as honorary member for life at the club’s Christmas Dinner, also gave the after dinner address. He recalled many of the events he and his wife have attended throughout the year around the world and spoke of the hope the real story of Christmas can bring the world in its present troubled times. 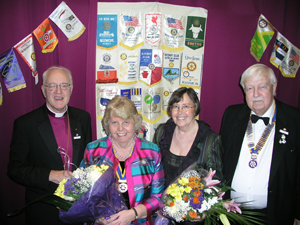