The search is on for Kent’s Top Choir thanks to a county-wide initiative by the Rotary Club of Canterbury. This prestige competition – which was inspired by the BBC’s Last Choir Standing series - is open to amateur choirs of all ages and styles as long as they are based in Kent or the Medway Authority.

The winners will receive the new Top Choir Kent Trophy as well as being given a unique opportunity to showcase their talents at the Canterbury Festival in October 2010.

The grand finale will be on 27 March 2010 at the Shirley Hall in Canterbury in front of an audience of enthusiastic supporters. A minimum of eight short-listed choirs will battle it out before an internationally acclaimed panel of judges headed by Dr David Flood, Organist and Master of Choristers at Canterbury Cathedral. Dr Flood will be joined by the internationally renowned conductor, Nicholas Cleobury, Susan Wanless, Director of Music at the University of Kent and Nancy Gillio-Terry, Kent Area Organiser of Sing Up UK. 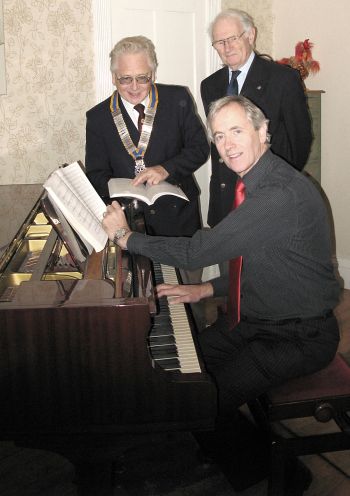 Richard Kemball-Cook, President of the Rotary Club of Canterbury said: “This is an exciting project for us to develop and launch. We have been working on it for over a year and are confident of county-wide interest to help us find the Top Choir Kent 2010.” He added: “The attraction of being able to perform in next year’s Canterbury International Festival will be of interest to choirs the length and breadth of Kent”.
This optimism is reflected by Rosie Turner, Director of the Canterbury Festival. She said: “There are many excellent amateur choirs across Kent of all styles and ages. This competition gives them the chance to perform on the same stage to compete for a place in the 2010 Canterbury Festival.”

Crimefighter Alarms Ltd, Canterbury are sponsoring the event. Company director, Geoff Goodban, said: “We are delighted to be able to offer our support to such a fantastic county-wide competition being held locally.”

BBC Radio Kent is the competition’s media partner and will be broadcasting selected entries on the Sunday Programme with Martin Buchanan throughout the winter and will record the final next March for subsequent transmission.

Choirs are encouraged to get their entries in well before the deadline of 31st January 2010 to stand a better chance of being heard on Radio Kent. Will Roffey, BBC Radio Kent’s Assistant Editor is delighted to be involved. He said: “Singing in choirs is one of the nation's favourite pastimes and we're looking forward to bringing some of the best local performances to audiences across the county.”

The closing date for entries is 31st January 2010. Full details, entry forms and competition rules can be found at: http://www.topchoirkent.org

Rotary charities both locally and internationally will benefit from the funds raised.