On May 27th 2009, supervised by Rtn Mike Bridgeford, 25 Rotary Members and partners arrived at 09:30 to be fitted with hard-hats.  We were shown around this near-complete development of street-level commercial units and eight first and second-floor apartments.

It has been a complicated project, lasting over 2 years because of the conflicting requirements of modern-day planning regulations in an ancient, listed building (on Roman foundations and cellars) plus the difficulty of accessing a site in the centre of the City.  The internal floors needed supporting and sometimes re-positioning, while the roof had to be supported all the while. 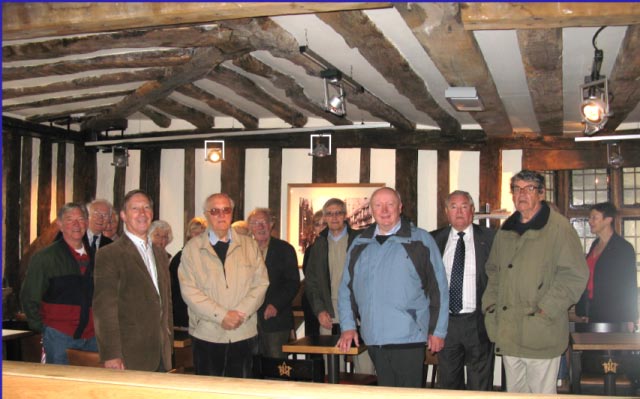 There were numerous fine examples of medieval timbers, some of whose painted surfaces needed very careful and painstaking conservation, a few square centimetres at a time.  The eight new apartments were of unusual shapes, since they had to be created above the commercial units and under a complicated medieval roof.  Conservation rules do not allow their windows to be double-glazed.

Hard hats on to visit the building site

Some of the apartments will have balconies with stunning views of the Cathedral.  All have access to a first-floor patio area.

Our thanks go to Coombs, Mike Bridgeford, Assistant Site Manager Matt Smith and Surveyor Martin Silk for giving us an interesting and informative Vocational Service visit.