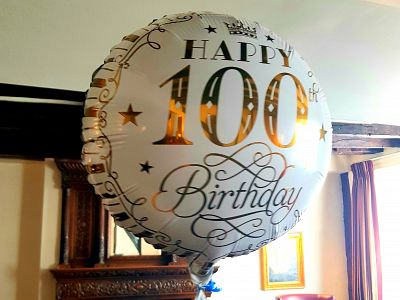 On this day,100 years ago....our Club was chartered and held its inaugural dinner at The County Hotel in the centre of Canterbury. Today, 100 years to the day, some of our Members met again at the venue (now ABode Canterbury) to mark this milestone.

At the end of December 1921, not long after the end of the First World War, Rotary was getting increasing recognition globally and growing as an international force.

At the suggestion of a Rotarian from the Margate Club (Canterbury’s Mother Club), Alfred Baynton of Canterbury and General Manager of the East Kent Road Car Company convened an informal lunch at The County Hotel.

The following February, 100 years ago today, the Club marked its Charter Night and Inaugural Dinner at the same venue.

In order to celebrate the momentous occasion, some of our Members and their wives met in the Cathedral Lounge on the first floor of the ABode for an informal coffee, arranged by Past President Harry Cragg & his wife, Inner Wheel member Sheila Cragg. For several members it was the first outing out in a while and it was lovely to exchange chit chat and talk of our own recollections of the Club.

There were a few old leaflets and booklets out for our Members to browse – including the Rotarian Guidebook given to Harry when he first joined. We also saw the certificate recognising Rotarian and local newspaper magnate Warwick Elvy as a Paul Harris Fellow. Warwick was Sheila’s father.

Harry gave an informal recap of the Club's early days, saying "it's very nice to have a coffee and a chat and celebrate our history". The first President was Wright Hunt, then Mayor of Canterbury. Alfred Baynton was elected as Secretary, becoming President of the Club in 1926-1927 and District Governor the following year. Interestingly, there were several Past Presidents there today - including PPs for our 70th year (John Hill, PP 1992/93), our 90th (Harry, PP 2011/12), our 95th (Martin Ward, PP 2016/17) and of course our 100th (Stephen Thompson this year, to be followed by Tony Loughran this coming summer).

Everyone thanked Harry for the get-together and he received an appreciative round of applause. Rotarian Farrukh Hussain also gave a quick "speech"; he is among our longest serving members. He joined us in 1978 when Victor Banks was President; before that Farrukh has been a member of Rotary in Sheffield. He joined our Club to do something totally different to his day job (psychiatry) - quipping "you were all normal people back then!" Smiling at the fact the Club is 100, he reminded us all that "age doesn't matter - what DOES matter DOES NOT age!" He himself joined as a young man and many years have passed since and the Club has changed in many ways - including having ladies join quite a few years ago.

Martin also recalled an anecdote about John Sullivan, President of our Club when it moved from the old Country Hotel; it seems John liked to talk about "rice and ice" on offer at the hotel.

Finally, Stephen Thompson said a word or two - keeping his more formal words for this evening's meeting at the St Lawrence Ground of Kent County Cricket Club, where our Club moved to in the 80s and where it has remained ever since (watch this space for what happens at the meeting!)