Evening meeting: 100 Years of Us, and a special surprise 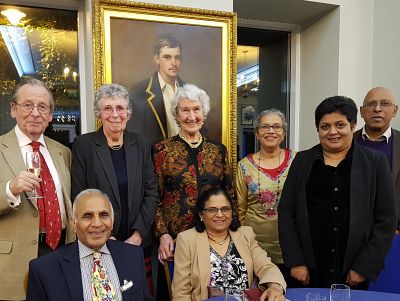 Yesterday our Members & guests met for an evening of fellowship that marked the momentous occasion of our Centenary and "100 Years of Us". One Rotarian also had a special surprise...

Our Members and guests gathered together in the Pavilion at Canterbury Cricket Ground - a room full of cricketing history which was perhaps apt for our us as we reached a century! It was really lovely to see so many gathered together, with many Members also bringing in their guests. Meanwhile, a few of our Members not able to be there in person joined us by Zoom.

Our President for this year, Stephen Thompson, welcomed everyone to the meeting and wished us all a Happy 100th Birthday; this was followed by a spontaneous rendition of "Happy Birthday to You" – in which everyone joined in!

Stephen read out a few messages and birthday wishes, including one from Sinitta Nightingale, the President Elect of our fellow Canterbury Club, Rotary Club of Canterbury, Sunrise, in which she said "You have all accomplished so much during the 100 years you've been running and you should all be so very proud of it. Canterbury is very lucky to have you supporting the community and I (on behalf of Canterbury Sunrise), would like to wish you well for the next 100 years." A birthday card from all the members of our local Inner Wheel was also passed around.

The thought for the day - a regular feature of our meetings - was given by Rtn Dee Mepstead; it focused on the Rotary 4-way test and the importance of fellowship. "Good fellowship is the cement of the community," Dee said. Stephen also gave a vote of thanks to Rtn Rosemarie Morton, who had kindly bought drinks for all our Members at New Year.

Stephen then presented three "Long Service Certificates" - to PP Roger Bickerton, Rtn David Naumann and Rtn Andrew Barchi (to Andrew in person). He thanked PP Tim Brett and the Awards Committee for their support - before building up to the first surprise of the evening. "Shortly after I took over from Alan Mepstead as President, I was given an award to present to someone in the Club," said Stephen, adding "however, Covid saw to it that this person would not be attending any of our meetings. I thought that the Christmas Party might crack it, but he eluded me again!" Turning then to Tim Brett, (who was joining us by Zoom from his home, with his wife Maggie), Stephen continued: "Even tonight he's not here, but thanks to Maggie, we've finally trapped him on Zoom...and on this very special evening too!"

Stephen reminded us all that Tim joined Rotary back in 1961 ("when I was only a child," he quipped) so last year Tim clocked up 60 years in Rotary. "It's an achievement that few of us will ever attain or ever hear of another attaining," said Stephen. He went on to say how Tim had helped shaped the Club, worked hard on various committees and given his "balanced, thoughtful contributions" which "have earned him enormous respect of both new and older members working with him."

Stephen also reminded us of "Jazz on the Farm" - a fundraising and community event held in 2000 (when Adair Roche was President, a year after Tim), when Tim had generously provided the use of Brett’s Milton Manor Farm as the event venue; it was also the special day on which our Duck Race was born. "We had a job rescuing the ducks before they shot under Milton Bridge and floated past the fly fisherman and through to the middle of Canterbury," he said.

Tim, "an ideas man", also conceived the idea of Top Choir Kent - a very popular fundraising event held across Kent which our Club used to oversee. Tim was able to obtain help and sponsorship to “get the show on the road”. Currently, he's playing a key role in helping us to move forward with "The Point" - the Drinking Water Refilling Station which we plan to gift to the City of Canterbury to mark our Centenary.

In 2007, Tim was awarded a Paul Harris Fellowship in recognition of his service. Talking also of Tim's contribution to the community outside Rotary (to The Prince of Wales Youth Club for many years, Porchlight, The Lord Mayor of Canterbury’s Christmas Gift Fund), Stephen happily announced  "it gives me great pleasure, on behalf of all of the members of the Club, current today, and of all of those past members who have known you over the years, to recognise your 60 years of service on this, the Club’s 100th birthday, and to give you the award of a Sapphire* to go with your Paul Harris Fellowship". Allowing this to sink in for a second, Stephen continued: "Nationally you have been recognised by the awards of Deputy Lieutenant and Freedom of the City of Canterbury, achievements that as very modest man, you never mention. In Rotary we cannot match that, but what your colleagues have also decided to do is to award you with a second sapphire for your contribution not only to Rotary, but also for all the help that you have given to so many charities over the years." It was at this point that on screen we saw a surprised Tim being handed his pin with two sapphires by Maggie.

Tim, smiling broadly and clearly delighted with the awards and recognition, simply stated "this really is a fantastic honour and thank you so much!" He added: "Between my father [William Brett, PP 1943-44] and myself, we have probably done 85-90 years for Rotary!". He also joked that he now knew why Maggie had been so insistent he should join the meeting by Zoom! Tim was given a very warm round of applause from the audience.

Stephen then gave the Centenary Toast: "It's a very great privilege for me to be your 100th President on such a special evening and I thank Tim Brett, Martin Ward and Tony Loughran for arm-wrestling me into the position. Tonight, I'd like to invite you all to reflect over those hundred years, of the 100 presidents, of the hundreds of members who have gone before us, of the tens of thousands, possibly hundreds of thousands of pounds of money raised and of all the help given to the Canterbury community and abroad. That really does start to bring into perspective what a powerful organisation Rotary is and the contribution that our Club has made." He spoke of our friendships - including that with our Pentangular partners - and the fun we have while also serving others. "Please go home with pride in what we have achieved, BUT also with a sense of responsibility, to continue our predecessors' good work as we start the next 100 years in this Club’s history. Congratulations to you all," he added, before inviting everyone to stand for the toast: "The Rotary Club of Canterbury!"

Next, Kevin Fielding, our Assistant District Governor, said a few words, stating “Canterbury is one of the best Clubs there is" and adding, "you can certainly wear your hat with pride!” He drank to our health and wished us all a very successful future.

The evening was not over as next Rtn Julie Reza was invited to take the microphone. "Like many of you, I was very sad when our plans for a special 100th birthday party had to be postponed because of Covid uncertainty,” she said. “I wondered if we could do something special instead to mark this day. So I asked myself, what was it we were really marking? And of course, it's 100 years of US. So...ladies and gentlemen…I present to you, 100 "Years of Us!". With this the screen lit up with a short, two-part silent movies-style video about the Club.

The first part touched on the Club's 100-year history, it's Members, the charities and causes it's supported, and the fun had along the way. There was also a moment to remember Members ("dear friends") that we have lost.

The second part of the film was a jovial review of some of our recent activities through the award (in jest) of Oscar-like prizes: "The Stevies". This section included lots of light-hearted moments, all illustrated with photos. For instance, "Best Hair & Makeup" was awarded to the late Rtn Bob Anderson for the fairy costume in our pantomime, while "Worst Hair & Makeup" went to PP Peter Hermitage (in a wig). A video clip of our Duck Race, with Peter cheering on the ducks, won "Best Live Action", while the duck squad that help retrieve our ducks won "Best Stunt Team". Rtn Nan Miller, known by Members for her linguistic skills, was awarded "Best Actress...in a foreign language." The final award of the evening was for Best Actor. Who did that go to? It went, of course, to Tim Brett (dressed as Mr Duck, a role he plays each year at the Duck Race) because "he always wins everything anyway!" The video got a few giggles from the audience, and cheery appreciation for all of our winning "stars" who, along with all our Members, contribute so much to our Club.

Finally, Stephen drew the evening's entertainment to a close with the words: "Remember tonight, go home with pride on what you have achieved as a Canterbury Rotarian, work starts again tomorrow on the next 100 years!". He raised his glass and, as always, toasted: "Rotary the World over."

Picture: Some of our members and their guests pose for a picture together to mark this momentous day. Picture credit: Rotary Club of Canterbury, Kent, UK. We hope to have a few pictures on our facebook page in the next few days.