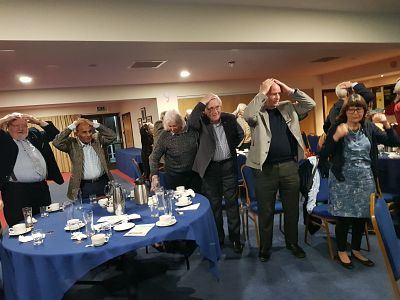 On Tuesday our Members and guests were transported back in time to 1922 - the year of our "birth" - with a multimedia presentation touching on everything from health and transport to entertainment, sport and, of course, Rotary!

Our speaker for the evening was Past President Peter Hermitage who treated us to a splendid presentation, as he always does. Dressed for the occasion in a three-piece suit and bow tie, as would have been the norm for a Rotary meeting back in 1922, Peter said we would be going on a "journey of 100 years with fascinating people".

During his talk, which was interspersed with plenty of photos, video clips and sound bites, Peter helped us to imagine what life must have been like at the time; he also gave us a taste of what Rotary was like too.

In 1922 the world was still facing the aftermath of World War I. The Irish Civil War began in June 1922, and the USSR was created. At the time the British Empire was at its largest extent, "covering one-quarter of the world and ruling over one in four people on earth".

Showing us an early picture of the War Memorial in the Buttermarket, "erected in honour and glory of Canterbury men who fell in the Great War," Peter reminded us that the Memorial had been unveiled just the previous October to our birth. "When you go through the names of Rotarians and you look at the names on the war memorial, you cannot help but wonder how many of those men experienced the tragedy of the trenches in their own families." Our Club still lays a wreath at the Memorial on Remembrance Sunday each November, together now with fellow Canterbury Clubs Sunrise and Forest of Blean.

We were shown charts of how life expectancy has improved over the years (in 1922, it was only 55.6 years for males and 59.6 years for females). Peter also shared some wonderful historical shots of Canterbury, including a video clip of a young lad on a bicycle passing through the arch of Westgate Towers.

We learned about the original hospital in Canterbury - on the grounds of the monastery in Longport. (The board of management only authorised the start of construction on the Kent and Canterbury Hospital in 1934.) Again, Peter touched on our membership - "Throughout the history of the Rotary Club there have been doctors, administrators and volunteers who have been involved with the hospital," he said. To this day we maintain a close link with the hospital; for example, our Past President Viv Pritchard was Chair of the League of Friends and is still a member, and we hope to help yet again with a BBQ stand at their annual fundraising fair in the summer.

Peter reminded us that back in 1922 the Elham Valley Railway was still running with a scheduled service from Folkestone to Canterbury, and the Crab & Winkle line was still in existence. During the 1920s, the service was eight or nine trains a day. In 1923, the line became part of the Southern Railway and like many other lines around the country it suffered from competition from bus services.

Moving on to music and entertainment, Peter asked "would you all like to have a sing song?" before playing a burst of music which he encouraged us to join in with. At first there were mumbles of confusion until we recognised the tune: "My Old Man" by Miss Marie Loyd. "Way hay," called out one of our audience members!

Peter has been busy rummaging through our archives and various materials that members have produced over the years. Looking at our old membership books, Peter noted that in the past many members had also been members of the Chamber of Trade (i.e. active local business people). These days we have a much broader cross section of backgrounds represented in our membership.

As well as lots of interest in cricket, Members were involved - as still - with local schools, hospitals and youth work. Peter found some other interests listed in the book more amusing: chair caning (making chairs from cane, we hasten to add), keeping goats & poultry, and horse racing!

Peter spoke briefly about cricketer Frank Woolley - as he pointed out from the room at the cricket ground in which we were all seated to the Frank Woolley Stand across the pitch, build in 1927. Golf and football also got a mention.

Moving on to communications, Peter reminded us how only affluent homes had a phone. "If you wanted to communicate you needed patience. [You relied on] post, word of mouth, newspapers," he said. The BBC was formed later in 1922, but there was some radio from a station called 2LO, operating from Marconi House in London, initially for one hour a day. Our Club now relies on many other forms of communication - this website and our social media channels, for example. We've also learnt to make the best of Zoom.

During his talk, Peter spoke about our Founder Member, J. Harold B. Young DSO MC. Harold had a remarkable life and the citation for his MC states: “During advance he showed great ability and determination, organising and directing the operations of his company after his Commanding Officer had been wounded. He also did excellent work in bringing back valuable information through heavy shell fire.“ In terms of Rotary, Harold was described as "like a stick of rock - he had Rotary running right through him." Along with Warwick Elvey, Harold was a Founder Member of the Christmas Gift Fund in 1952 - something that our Club still likes to support each year just before Christmas.

Since 1922 the world had to face another World War, from 1939-1945. Apparently, our Club Council decided, on 4 September 1939 (the day after Chamberlain announced we were at war), to “carry on with our activities on normal lines as far as circumstances would permit.”

Unfortunately on June 1, 1942 Canterbury was bombed and 43 people lost their lives, with many more wounded. Peter showed us pictures of the damage to buildings. Just as we did recently during the heights of the pandemic, Rotarians "kept calm and carried on". For instance, minutes from a special Council meeting in 1944 note discussion of the purchase jointly with the British Legion of a property in New Dover Road as a veteran’s club. (We still support the British Legion each year by going out and selling poppies for the Poppy Appeal.)

"If you look at our Club and see what we have achieved through crises of hard financial times, war, coronavirus, working internationally, responding to need in the community, we have got on with the job. That’s not some faceless bureaucracy – it’s people who share the spirit of fellowship and service," said Peter, who went on to talk about our support of local youth, our fundraising (especially for Ukraine), and our community events including Top Choir Kent and the Duck Race.

Peter spoke of some notable Rotarians over the years - including "The Thompson Dynasty", of which our current President, Stephen, is the third member! He also mentioned the Club's support (in our Golden Jubilee year in 1972) of the restoration of one of the bays of the cloisters at Canterbury Cathedral (which still has a Rotary plaque) and our current plans to build “The Point” (a stone column housing a drinking water bottle filling station) as a gift to the people of Canterbury to mark our Centenary.

Peter went on to talk about two interesting offshoots of our club - the local Inner Wheel branch and Pentangular (a group of five European clubs of which we are a member; our Club plans to host visitors from our fellow clubs in Kent this year).

Penultimately, Peter showed us a picture of "the Magnificent 7" - old pictures (not from 1922, we should emphasise), of seven of our Members for us to guess. He also got us standing up to play a game of "spin two coins" to decide who would win a celebratory bottle of Champagne - basically we were to put a hand on our head or back to indicate what we thought the coins would be (heads/tails). After a number of rounds Peter presented the bottle to our winner!

Finally, Peter ended with a slide showing just a few of the many, many local and international causes we’ve supported over the years. Quite an achievement we think - even if we do say it ourselves!

Picture: Heads or tails? Towards the end of his talk, Peter had us playing "Spin two coins" to decide who should win a bottle of Champagne to mark our Centenary. Picture credit. Rotary Club of Canterbury.