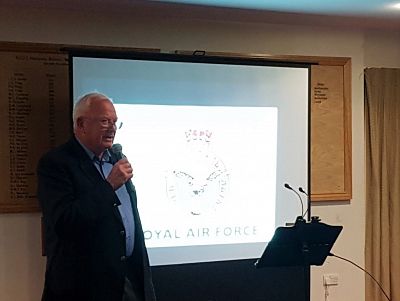 Most of us have heard of the Dam Busters and heard of their role during the Second World War (WWII); others perhaps have watched the film. On Tuesday our members got to hear much more about 617 Squadron from enthusiast Rob Orridge.

Rob was in the Royal Air Force (RAF) for nine years, which was when he first became associated with the Dam Busters; during his talk he gave us facts, figures and anecdotes about the Squadron with accompanying music and pictures.

Last year, 2018, was a special year for the RAF - it celebrated its 100th year (following the amalgamation of the Royal Flying Corps and the Royal Naval Air Service). 2018 was also the 75th anniversary of the Dam Busters raid (also known as Operation Chastise). The name the 'Dam Busters' is commonly used to refer to 617 Squadron because of the Squadron's attack on German Dams during WWII.

The Squadron (originally known as Squadron X) was formed on the 23rd March 1943. Its motto, Rob believes, is the only RAF Squadron motto in French: 'Après nous le déluge' (After us, the flood ). The Squadron's formation was approved by King George VI and its first Commander was Guy Gibson. Shortly after its formation, Gibson met Barnes Wallis, the inventor and engineer who created the infamous 'Bouncing bombs' used in the Dam Busters raid. Interestingly, it seems that Gibson was not told about the actual targets during their meeting (during which Barnes Wallis described how the bombs operated) as Gibson didn't have the necessary level of clearance at the time.

Surprisingly, the largest contingent of airmen in the Squadron was not British - there were only 89 British servicemen while there were 119 Canadians, 132 Australians, 130 New Zealanders and 131 from the USA.

Barnes Wallis was born in Derbyshire in 1887 and died in 1979. He had many other achievements besides the bouncing bomb (codenamed 'Upkeep') - e.g. the Vickers' R100 Airship (in 1930) and two 'earthquake bombs', the 6 tonne 'Tallboy' bomb and the 10 tonne 'Grand Slam' bomb. After the war he became involved in futuristic aerospace with projects including supersonic flight. He was awarded a CBE in 1943 and was knighted in 1968.

The plane associated with the Dam Busters raid is the now iconic Lancaster bomber. A total of 7,377 of these were built and 3,349 were shot down or destroyed. Well over 1 million people were involved in their production. The planes have some remarkable specifications - the wingspan is 102', and the max speed around 275 mph. Each has four engines and uses around 200 gallons of fuel per hour.

Operation Chastise was launched in May 1943. All the targets were in the Ruhr, the heartland of Germany. Destroying the dams would mean disruption to electricity supplies in Germany. Also, Möhne Dam was a hydroelectric dam that helped with the supply of the huge amounts of water needed for German steel production. The Eder Dam, which was only patrolled by sentries, produced 200 million tonnes of water. The Sorpe dam was also lightly protected - that dam produced 70 million tonnes of water.

One of the main challenges for the airmen was finding the range - very hard at low altitudes. They landed up using a hand-held Y shaped wooden sight with two nails on the two arms. Rob had a replica of this which he passed around to our members to look at. Basically, the two nails were aligned with the two towers at each end of the dam to reach the correct parameters. (At this point Rob pointed out that the method of finding the range shown in the 1965 Dambusters film was one of several inaccuracies in the film; we had to remember that the film was made before the 30-year period of declassification.)

Finding the correct height was also a challenge for the pilots - altimeters were useless at low levels such as 150 feet. A solution using spotlights was found - though it didn't work too well.

A total of 19 Lancaster bombers were used during Operation Chastise. These went out in three 'waves' or formations. The first, targeting Möhne and Eder, involved 9 planes, one of which crashed outbound. The second wave, targetting Sorpe, involved 5 planes, four of which crashed outbound. Five planes also went out in the 3rd wave. A total of 11 planes returned; 53 crew were killed and 3 were taken prisoner (though they did survive the war).

Rob went on to tell us about the attacks. Gibson was first on the Möhne attack; his bomb exploded short of the dam and it was Maltby who was credited with eventually breaching the dam. Others that took part were Martin, Hopgood and Young. The attack on Eder involved Shannon, Maudslay and Knight. It was a direct hit by Knight that breached the dam. The attack on Sorpe involved McCarthy and Brown. They struggled with mist and fog and it was only the 8th attack that resulted in success; the dam cracked (though it was not breached - possibly because of earth in the structure absorbing the shock of the bomb). Ennepe involved Townsend - he hit his target, but this had little effect on the dam.

Others that were involved were Burpee, Astell, and Barlow (who both crashed outbound), Byers (shot down) Rice (lost the bomb after clipping the sea), Munroe (damaged outbound), Anderson (unable to find target due to fog) and Ottley.

After the attack the airmen received a number of medals for their significant heroism: a total of 7 Victoria Crosses, 14 'Bar to DFC' and 12 'Bar to DFM'.

Rob went on to talk in more detail about Guy Gibson, who received a VC in June 1943. Born in India and having had an unhappy childhood, Gibson joined the Airforce after initially failing due to his short leg length (he was relatively short at around 5 foot 6 inches). Following the war he toured the USA and Canada as a goodwill gesture. One of the anecdotes that Gibson shared during his turn on Desert Island Discs in 1944 was the death of his Labrador in a road accident which he learned of just before the Dam Buster raids. Gibson died in 1944 and was buried in Holland. The circumstances of his death remain unclear. One relatively recent hypothesis is that he was killed as a result of friendly fire - he'd been on a mission in a Mosquito aircraft and lost his navigational aids after being shot at; he'd decided to tag two Lancaster bombers but, thinking he was a German, they'd shot him down.

Squadron 617 also had other wartime missions: Sinking the Turpitz (the largest battleship built by the Germans), destroying a V2 rocket base, bombing Hitler's secret weapon's factory, attacking his alpine hideaway ('Eagle's Nest'). destroying a V3 super gun site and attacks on German rail and canal networks and U boat pens. The Squadron was disbanded in 1955 but reformed in 1983 with 12 Tornado aircraft. It disbanded again in 2014, only to be reformed in 2018 with new Lockheed Martin F-35 stealth bombers.

Rob drew his talk to a close by telling us of two local areas of interest for enthusiasts: Reculver Bay (where lots of the bombs were tested) and Wickhambreaux, where David Maltby is buried. He also told us that two Lancasters were still flying (one on the UK and one in Canada) and just one of the original Dam Busters was still alive. He also reminded us that a number of women had also flown the aircraft - the women that had delivered them, who were also a crucial part of the war effort.

Finally, Rob told us that in 1977 the bombing of dams was outlawed as part of the Geneva Convention.