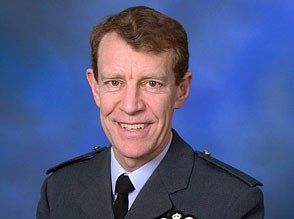 Members of our Club were treated to behind-the-scenes insight into “Intelligence” by Air Marshal Christopher Nickols at the Club’s evening meeting on Tuesday.

Air Marshall Nickols is very much a “local” man – he was born at Kent & Canterbury Hospital and studied at St. Edmund’s School here in Canterbury. From there he went on to study Engineering at Downing College, Cambridge. He joined the Airforce in 1974 – though in some ways he “joined” while still at school, being determined to be a fighter pilot as a young teenager.

In all, Air Marshall Nickols spent 35 years in the RAF, retiring 5 years ago. The first 10 years of his career coincided with the cold war. Since then he has been involved in every major UK campaign – such as the Falkands War, Iraq and Libya. Air Marshall Nickols finished his RAF service with 7 years in the Ministry of Defence in Whitehall, topping his career as Chief of Defence Intelligence - responsible for all three armed services. After retiring he stayed in the Airforce family, running the Royal Airforce Benevolent Fund (which distributes around £20 million per year to its beneficiaries).

During his presentation, Air Marshall Nickols talked about National Security and Intelligence; this body, which started as the National Security Council, has a Secretariat which helps define the principal threats to the Nation. Currently these include - but aren’t limited to - terrorism, cyberthreats and military conflicts. There are, in effect, two parts to any threat – capability (of a person, armed force, country etc.) multiplied by the intent to use it.

Air Marshall Nickols defines “intel” (short for intelligence) as the assessment of something that someone else is trying to hide from you. He joked how intelligence is the “Second oldest profession in the world” – and reminded us that even the Ancient Egyptians and the Roman Empire carried out intelligence activities. Touching on this he quoted the Roman politician Cicero as saying "How few are they who are able to carry a rather weighty letter without lightening it by reading.”

Tradionally, intel has used three key tools: observation, questioning, and interruption of communications. But technology, notably the internet, the use of aircraft and space, and computers and digital photography, has changed these enormously.

The main types of intel these days are Human intelligence (HUMINT) - intelligence gathered by people e.g. through questions; signals intelligence (SIGINT) – largely the interception of communications; and imagery intelligence (IMINT) which is, in effect, the equivalent to observation.

HUMINT has changed the least over the years and is the intel most commonly portrayed in books and films, notably Ian Fleming’s Bond and John Le Carre’s books. Some of what’s been written reflects reality – probably because both authors had inside knowledge through their work. Here in the UK MI5 and MI6 are focused on internal and external threats respectively.

SIGINT originated with radio signals, and the role of Bletchley Park in decoding messages during World War II is renowned. But nowadays the cyberthreat is the biggest threat; as such GHCQ in Cheltenham is very “high-tech”, especially in cryptography.

IMINT: During World War I this started with observations from airplanes behind enemy lines by pilots and later via cameras. Images can now be collected from space and digital cameras have bought us into a new age of imagery (allowing a quick and easy way to collect, find and store important information). The use of space has been one of the biggest shifts in intel capabilities, starting with the launch of the Soviet satellite Sputnik in 1957. Since then, more than 10,000 satellites have been launched (mostly for communications rather than for intel). Just one satellite alone can cost 1 billion pounds. At this point Air Marshall Nickols gave members an interesting illustration of how geocentric (satellites that moves in relation to the earth) and geostatic satellites (satellite that stay stationary in relation to the earth, e.g. TV satellites) differ and have roles reflecting this difference.

Air Marshall Nickols fielded a number of intel-related questions at the end of the evening, and in summary he made clear that each type of intel has advantages and disadvantages, so that the best way of getting intel therefore is “All source” intel – i.e. different types of intel from a variety of sources (though even this will give an incomplete picture).

The talk was fascinating and was very well received. Gerald Colson, who hosted Air Marshall Nickols, gave the vote of thanks on our Club’s behalf, with one of our members giving a touching account of the support that a family member had received from the Royal Airforce Benevolent Fund and praising Air Marshall Nickols' leadership there.