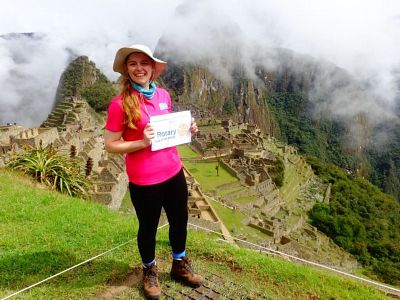 We've said before, it's always great to get an update on donations we've given or projects that we've helped with. This time we had an update from Guide/Ranger Leader Kara-Jane Senior on her fundraising adventures in Machu Picchu in Peru.

Last summer our club agreed to donate £160 to Kara-Jane so that she could buy the boots that she needed to go on her trek to raise funds for Girlguiding. Kara-Jane promised to give us an update on her adventure on her return, which she has just done - you can read her write up, titled  "An Inca-redible adventure" below:

"Late on 11 October I set off with 11 other Girlguiding volunteers from all over the UK on the adventure of a lifetime, travelling over 6,000 miles to Peru in South America. Our aim was to walk 26 miles through the Andes along the famous Inca Trail to Machu Picchu. We had spent the past year preparing for this trip and spreading the word to fundraise thousands of pounds for Girlguiding, and had only met once prior to the trip.

After a brief stop in Bogota (Colombia), we landed in the city of Cusco, which was once the capital of the Inca Empire. At 3,400m above sea level, I soon felt the effects of being at altitude, which the jet lag did not help with. We went out to explore Cusco with our local guide, Viktor, and struggled through a large dinner due to being so tired. It was such a relief to hit the pillow after so many hours, though unfortunately, at altitude it can be hard to sleep (we were told to try not to stress about this).

The next day was our warm-up walk. We took a minibus up to about 4,000m, and then took a route around several Inca archaeological sites, descending gradually back down to the Cusco. The walk was taken at a very gentle pace and we stopped frequently to hear from our local guide about the sites (and to take some photos of alpacas). We also visited a textiles shop enroute where we learnt about alpaca wool, and I couldn’t resist purchasing a cosy alpaca wool jumper. After returning to Cusco it was time for last minute packing and kit list purchases.

The next day was the day that the main event would begin, for which we had to get up very early. We set off at 5.30am to drive through the Sacred Valley of the Incas to the Inca Trail start point: KM 82 (2,650m). Here we met our crew of porters and cooks for the first time - about 20 local men preparing to carry a lot of our luggage as well as tents and cooking apparatus along the entire trail! The weather was mostly good - apart from a few showers in which many of my teammates were delighted to get their snazzy new ponchos out for - and we had a fairly gentle walk for the first day, though there were still some steep climbs. We passed through the last few residential areas we would see for a few days, and had our first experiences of the Inca toilet (it was at least private). Already we had spectacular views, and passed many archaeological sites, such as the Llactapata ruins (2,630m). Lunch was our first experience of how well the local tour company looks after trekkers. We had a mess tent with individual stools sat around tables covered in tablecloths and folded napkins. We were served fresh lemonade, soup and a rice dish, which after many hours of walking was very welcome. After a few more hours of walking we reached our first campsite at Wayllabamba, and were introduced to the “Magic Tents” (toilet tents). We were served dinner as the sun set, and the stars came out. Due to the lack of light pollution you could see the milky way clearly. But I couldn’t stargaze too long as sleep was very much needed.

On day two of the Inca Trail we got up in time for breakfast at 5.30am and left the campsite at 6.15am (15 minutes later than our guide wanted us to - oops). This was to be the toughest day as we had over 1km of altitude to ascend, up the aptly named Dead Woman’s Pass (actually named because of what the mountain's profile looks like). We climbed up through our first experience of cloud forest, and escaped some very heavy rain at our lunch stop. Eventually we reached the top of the pass, at 4,215m. It was quite chilly up here so we had to layer up, and unfortunately quite foggy, so we had to imagine some of the view! Here I like to believe that I saw a condor, which was a very spiritual bird to the Incas. After enjoying the sense of achievement we began to descend 800m into a valley, towards our campsite for the night, with some accompaniment of singing.

Breakfast and departure on day three was the same as the previous. Immediately we began on a steep climb upwards. We ascended the Runkurakay Pass, the second highest point on the trail (3,920m), descended a little then up the third pass Phuyupatamarca (3,600m). There were several Inca ruins along the path to explore and learn about. This was a day of some spectacular views across the Andes. Whilst day two was the toughest climb wise, day three was the longest in length, and we ended up completing the last part literally descending into darkness - but we did get to test out the quality of our head torches!

On day four we had to get up at 3.30am to allow the camp to be cleared so that the porters could run down to the train station in Aguas Calientes (the town of Machu Picchu) and get the train back to KM82, ready to start the whole trail again with another group! We had to wait for the Sun Gate checkpoint to open at 5.30am and then headed on a gentle incline up to Inti Punku (Sun Gate). Unluckily we were unable to experience the sun part and didn’t have a view of our goal yet, but we knew that we were very close. As we continued along the path, for the first time since the first day we met people coming in the opposite direction. These were day trippers who had taken the less intense route to Machu Picchu (by train)!

We descended towards Machu Picchu (2,430m), passing a few other ruins, and the clouds finally parted to allow us our first sighting. Magical! Reaching the end of the trek was exciting, but suddenly we were surrounded by so many people, most of whom had definitely had a proper wash more recently than us! We savoured the experience, spending a few hours exploring the world renowned ruins and then headed into the town of Aguas Calientes for a very well deserved lunch, before catching the tourist train. This was like being in first class on a UK train, with a free drink and snacks offered to us all. We whizzed past the areas we had trekked through the last few days. At Ollantaytambo we disembarked and boarded a minibus to complete our journey back to Cusco, and the comforts of our hotel.

The next day we enjoyed a bit of a lie-in (difficult after several days of very early starts) and explored Cusco further, including a large market selling all sorts of goods and tasting different chocolate products as a chocolate museum. In the evening we had a meal to celebrate our achievements, which included a few Pisco Sours - a sour tasting cocktail that I loved. The next day about half of the group began their journey back to the UK, whilst the other half of us had paid to extend our stay. Six of us headed to Puerto Maldonado, and then onwards via motorboat to an ecolodge in Tambopata National Park, within the Amazon Rainforest.

Here we spent a few days ‘relaxing’ and experiencing the sounds and sites of the rainforest. We didn’t quite escape the walking just yet, as we had a few short sweaty treks on the itinerary, but we were well rewarded for our efforts. Throughout our time there we spotted: capybaras, agoutis, turtles, white caimans, a dwarf caiman, red howler monkeys, a cocoi heron, snake birds, tarantulas, brown capuchin monkeys, squirrel monkeys, a brown frog, fruit bats, hoatzin birds, titi monkeys, an eel, a sloth, macaws, and many beautiful butterflies, insects (including some fire ants that let me experience just why they are called ‘fire’ ants), and other birds. The food provided by the ecolodge was tasty and sustainably and locally sourced, and the homemade savoury plantain crisps were delicious (especially when still slightly warm). We even got to visit the small farm/plantation that supplied much of the ingredients.

This adventure was truly Inca-redible, and worth all the efforts of fundraising. It was great to share the experience with other Girlguiding members, especially as this provided a very supportive atmosphere. Together we fundraised £46k+. This money will support a range of things including new unit grants, grants for accessible guiding and supporting units in deprived areas; funding volunteer recruitment and developing new volunteer training materials; supporting campaigning work, and helping to fund GOLD (Guiding Oversees Leadership Development).

Trekking the Inca Trail made me realise just what I am capable of. The trip has inspired me to undertake big challenges in the future, and to make the most of opportunities that arise. In February this year I stayed at the International Scout Centre at Kandersteg (Switzerland) with friends from SAGGA (Scout and Guide Graduate Association), where I challenged myself to try out some winter sports for the first time: sledding and cross-country skiing - I did also go on a day trip to Our Chalet. In addition, I challenged myself to travel to and from Kandersteg by train to significantly reduce the carbon emissions of my journey, which gave rise to the opportunity to visit other places along the way. And, I already have more adventures in the planning, including volunteering at Sangam (WAGGGS World Centre), India, next year!

A massive thank you to everyone who supported me with this challenge. ¡Muchas gracias!"

Thank you Kara-Jane for your write up - glad to hear you helped raise so much for Girlguiding. We wish you well in your future adventures!