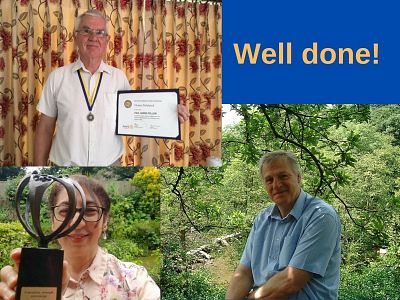 Two members of our Club were recognised as Paul Harris Fellows while a "Canterbury Rotarian of the Year" award went to one of our Club Members during our handover meeting the other day.

The first to receive the PHF recognition* during the handover from outgoing President Alan Mepstead was PP Viv Pritchard.

Viv joined our Club in 2010, shortly after retiring from a senior management role in the City Council. Since that time he has thrown himself into the Club's activities with great enthusiasm, becoming a President after only five years. He has subsequently been Chairman of the International Service Committee and has taken an active part in the Club’s Juba project. He has been a member of the Membership Committee for a number of years. In addition, Viv has been on Club Council for some time. During the course of the Covid pandemic he was one of our Zoom facilitators, allowing the Club to meet online and so keep members in touch with one another. Also during this time he was Chairman of the Friends of the Kent & Canterbury Hospital and is still active on that committee.

The second to receive PHF recognition was PP Lewis Norris. Lewis has also been a member of our Club since 2010, and since then has been a very hardworking and enthusiastic Member. Not only has Lewis served as Treasurer for five years, he subsequently served as the Club's Secretary for two years. He has also given solid service on Club Council for seven years. In his earlier life, Lewis served in the Royal Navy for 25 years, leaving as a Warrant Officer before taking up the post of Engineering Director at a water filtration company. He has also served as Lord Mayor and Sheriff of Canterbury and is currently an Honorary Alderman of the City. Not long ago he retired as Chairman of Magistrates, having sat for 18 years on the Bench. Lewis is also a published author, model maker and lover of the Arts.

Our Club's "Canterbury Rotarian of the Year" award, given by and at the sole discretion of the President, went to Julie Reza. Julie joined our Club in 2016. Her background in communications was soon put to use and she now writes the majority of the Club's news articles and oversees its Facebook and Twitter accounts; she also assists Rtn Shabana Raman with the Club's Instagram account. Over the last year Julie has been key in helping us help the Rotary Club of Dhaka in Bangladesh set up a Covid Laboratory in the National Cancer Hospital (and prior to that she has helped us fund food parcels and cyclone relief in Bangladesh). She was also Chair of the Judges for our recent Innovation Competition and was one of the Rotarians that helped set up this year's "Dear Future Self" competition. Julie often co-hosts our Zoom meetings and she sits on our International Service, Centenary, Web, Club Service and Membership Committees. Recently Julie played Tinkerbell in our Pantomime and the rather cheesy Phillipa Delphia in our Murder Mystery play. A former Senior Science Editor for TDR at the World Health Organization in Geneva, Julie now works as an independent Science Communication Consultant/Editor. She also sits on the Steering Group of international healthcare campaign HIFA.org and is a Content Advisor for the social business enterprise Punoh.com. In her spare time Julie writes short stories and children's poems and does art, calligraphy, cake decorating and photography.

*"A Club can request Paul Harris Fellow (PHF) recognition to recognise either a Rotarian or non-Rotarian who, in its opinion, is worthy of this award. Clubs in Rotary GB&I have traditionally reserved this honour to mark their appreciation for service to Rotary but personal donations to The Rotary Foundation will also accumulate credit towards receiving the award." (https://www.rotary-ribi.org/districts/page.php?PgID=517978&DistrictNo=1285). PP Tim Brett prepared the citations for the PHFs and it was our Awards committee who made the PHF recommendations for the President's approval.