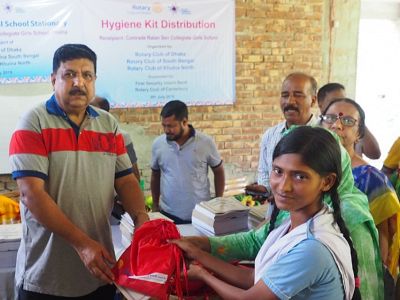 Hygiene and sanitation are some of the challenges that the poor face in developing countries such as Bangladesh - particularly girls and young women. This can have many consequences, including girls missing out on education during their periods.

Our Club (via its International Committee) decided to donate £300 to support the Rotary Club of Dhaka, Bangladesh, in their work to tackle this issue - the Club has an ongoing programme in which hygiene kits are distributed to the rural and urban poor. As part of the distribution - which takes part with the help of local schools and other charities - hundreds of school girls are given a hygiene kit after being taught about hygiene by qualified personnel from the Club in an hour-long presentation.

Earlier this year we posted an article about our donation. Our £300 donation covered the costs of around 90 kits. Each kit bag contains a washable sanitary cover and liners, a bar of soap, a washcloth, a resealable polythene bag and two pairs of panties. We have recently received pictures of the distribution to schoolgirls at Comrade Ratan Sen Collegiate Girls' school in Khulna, which was carried out in partnership with two other Bangladeshi Rotary Clubs (the Rotary Club of South Bengal and the Rotary Club of Khulna North). This school is located in a village where girls used to leave their studies after completing their primary education; many then went on to have forced early marriages. The school offers full free education as well as a midday meal and it has reported that 78% of the girls no longer face this fate.

Talking about the hygiene kit programme, Rtn Julie Reza, who is a member of our Club and has seen the Rotary Club of Dhaka's previous work with the distribution of sleeping kits said: "This really is a worthwhile project. I know for a fact that many young girls in rural and poor parts of Bangladesh suffer from a lack of access to hygiene products, so it's great that the Rotary Club of Dhaka and other clubs are taking this action. I really believe this will make a huge difference to the lives - and health - of these girls."