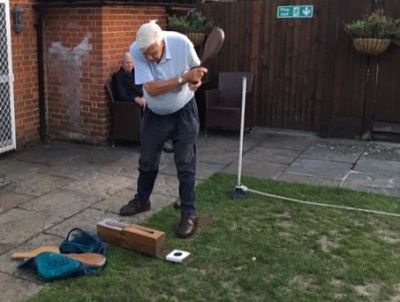 Bat & Trap, according to Canterbury's Bat & Trap league, is an ancestor of cricket - so it was somewhat appropriate that instead of meeting at the Cricket Ground on 20th August our Members could be found swinging a bat at Ye Olde Beverlie in Canterbury.

The Bat & Trap Evening was held as another one of President Neil Fraser's guest evenings. Bat & Trap is a old(e) pub game and has been played at Ye Olde Beverlie in St Stephen's Green for years.

Twenty-six of our Members and guests took part - most in 'peak' athletic condition, except for several Rotarians who'd taken part following recent hospital visits involving recent knee replacements, fractured arms and fractured ribs! (Fortunately, none of these conditions deteriorated due to the sporting activity.)

Teams of six competed, while others took part in a visit to the Manwood Almshouses next door. Rotarian Roger Power, managing Trustee of the Sir Roger Manwood Trust, conducted two excellent tours of this little known Elizabethan complex of buildings.

All-in-all the Bat & Trap playing went well - despite the odd hiccup, such as when the ball dissappeared somewhere when Past President David Barton hit the box.

A very convivial buffet supper followed in the dining room of Ye Olde Beverlie before the guest evening drew to a close.

Picture: Past President David Barton takes a swing with his bat, looked on by Rtn Andrew Barchi. Picture Credit: Rotary Club of Canterbury.

With thanks to David Barton and Alan Mepstead for details and pictures. Further pictures can be seen on our facebook page.