Canterbury Rotarians fight it out in Bat & Trap challenge 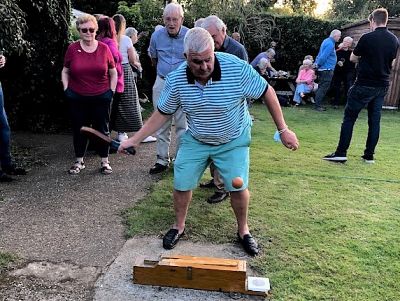 While many may have looked to the Olympics to showcase the best of sportsmanship, we looked no further than the Golden Lion in Broad Oak as it hosted an excellent Bat & Trap competition on Tuesday.

Around 51 people (including guests and members of the three Canterbury clubs – The Rotary clubs of Canterbury, Canterbury Sunrise and Forest of Blean (FoB)) attended the event, organised by our club.

The FoB team was led by President Nominee Phil Lennard and that of Sunrise by their President, Jarle Tatt. There were two pitches and the teams played from 7.00pm until 8.00-ish. All enjoyed the light-hearted inter-club rivalry and fun, laughter and banter.

The scoring was said to be "total chaos", but after considerable deliberations by Rotarians Raj Dasan and Viv Pritchard, FoB were declared the victors (having been the highest consistent scorers). Phil was presented with two bottles of champagne as the prize.

The exhausted athletes were then able to enjoy an excellent buffet supper (including particularly excellent ham) laid on by the Golden Lion.

It was great for everyone to get out and see each other after such a long time and enjoy the good weather. Also, as pointed out by one of the attending Rotarians, it was good to host the gathering at a local venue given that the hospitality industry has had such a heavy knock these last 18 months. The entertainment, food and facilities were all deemed to be excellent. The pub of course has longstanding ties with Bat & Trap which you can read about here, so we very much encourage others to enjoy a game there.

Chris Cox from FoB also held a raffle. The profit of just over £160 will go to Polio+ and so help the global effort to eliminate polio. (Together with the contribution from the Bill & Melinda Gates Foundation, this will mean nearly £500 will go towards this great cause.)

President Stephen Thompson thanked Raj for organising the event and Viv for helping out on the evening.

The FoB have already thrown down the gauntlet for a follow-up challenge next year which no doubt we will tell you about when it happens!

Picture: Canterbury Rotarian Tony Loughran takes a swing at the ball, egged on by other members of our club. Picture credit: Sue Thompson/Rotary Club of Canterbury.