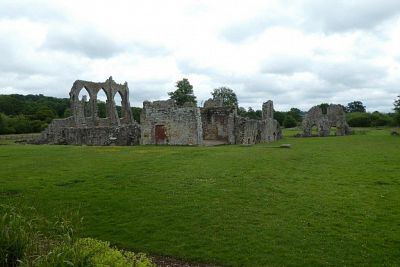 A Monkish General Election day. On 8th June a party of some 45, travelling by coach, visited the ruins of Bayham Abbey, which lie in a delightful piece of country near Lamberhurst.

Apart from one rather flustered English Heritage employee, who normally only has to minister to 5000 visitors a year, we had the place to ourselves. We were guided by Tony Weber who, since his retirement as a solicitor, has made a study of monasticism, and who explained that the Premonstratensian institution was dissolved by Cardinal Wolsey,well ahead of the Reformation of Henry VIII, because Wolsey wanted to use its wealth to found colleges at Oxford and Cambridge.

Five hundred years later, we thought it astonishing that such a enormous building never sheltered more than a dozen or so members of the institution, canons rather than monks, at any one time. The ruins were subsequently repaired somewhat to serve as a folly to enliven the view from a C18 mansion built on a rise. Under a lowering sky, which fortunately did no more than threaten rain, the whole site certainly has an atmosphere, but perhaps the most poignant view was of a large tree growing out of the East wall of the chancel of the church, its roots straddling both sides of the wall.

By the time we arrived at Battle abbey, a Cistercian establishment founded by William the Conqueror to remind the locals who was boss, the skies were clear. Again Tony made it very interesting for us. Perhaps because we had to share our visit with the world and his wife, it hadn’t quite the magic of Bayham - but the journey back through Rye and across Romney Marsh in brilliant sunshine, sitting high up in the coach, had an enchantment of its own.

And then we went to vote.