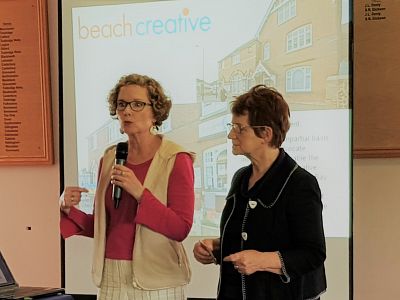 It’s funny how you can live somewhere for years and still be surprised to find new venues to visit and things to do nearby. Such was the case one Tuesday when our members heard a talk about Beach Creative in Herne Bay.

Beach Creative is a creative hub and gallery in Herne Bay that opened its doors to the public in July 2012. It’s a voluntary led CIC (not for profit organisation) founded by Gil Wilson, Mandy Troughton and Mandy Boughton (the latter two’s similar names causing much confusion and mirth).

We were lucky to have both Mandys come and talk to us.

The Beach Creative project all started after Canterbury City Council offered Beach House (due to be demolished) to them for one year. The Council had offered the house for creative purposes, so the team called on all friends and relatives to help redecorate the run-down property first – no small task given issues of damp etc. Nevertheless, their combined efforts led to the transformation of Beach House into what is now a functional building with a large, bright gallery replacing what was a dull room, and with new artist’s studios above. There's also a smaller gallery downstairs.

The upstairs studios are rented by 14 or so artists running their own little businesses. The building also plays host to lots of local creative classes and workshops – for instance, it has a sewing club, language classes, photography, arts and crafts classes, a choir, poetry classes and even woodcarving. In fact, there are people queuing to run classes – meaning they are almost bursting at the seams! In the evenings they sometimes have jazz and sketch jamming sessions which combine music and art. The building also now houses a Café – “Toast”, which makes it an ideal venue for a visit with friends or family.

The building also houses other community causes – for instance, “Forward Trust” helps people with alcoholism. Recently, ‘Take Off” has been working from there – this supports people with various degrees of mental illness, helping them to develop a range of skills. There's also a charity called "Bright Shadow" that helps people with dementia and sends out “memory boxes” to homes and hospitals throughout the country.

The artists are offered a knock-down rent which covers 50% of Beach Creative’s costs, and currently they have a waiting list for studio space. Toast is being supported by Beach Creative with a new initiative providing juicing workshops for well-being as well as offering a wonderful array of foods and drinks for all kinds of needs i.e. vegan/ vegetarian /dairy-free etc.

For the last four years Beach Creative has also received funding from UCA (University for the Creative Arts) to run a 15-week course Arts Foundation Course. These are free, for people on income support or those who have not had the opportunity to take up an arts course . As a testament to the success of this, a number have now gone to art college to do a degree.

Beach Creative also has an award-winning garden which was developed with support from Kew Gardens, and a lovely “kiddie garden” too. They recently took part in a "grow wild" project with Kew.

Both Mandys and their colleagues have worked on various projects in the community. For example, in 2013 they helped with the Duchamp Festival in Herne Bay (named after the painter and sculptor renowned for Cubist and Dada schools of work who lived in Herne Bay in 1913). The event drew people from around the world to attend. There were seven academics who each gave a paper on different aspects of Marcel Duchamp – his work, his life. The event was so successful that as a result there has been a cartoon festival each year since, with up to forty professional political cartoonists exhibiting their work in Beach Creative, and a number attending a “Cartoon Live” spectacle on Herne Bay’s Pier - where they set up their easels and draw. These cartoonists are from all the national publications, including Private Eye. Beach Creative has also hosted an International radio drama festival (though not this year) (with writers submitting work from numerous countries, including Poland and Russia) – basically stories that have to be listened to on the radio.

This July there's a joint exhibition with artists from Herne Bay’s twin town – Wimereux, N. France. Beach Creative has also worked with the Herne Bay Town Partners to provide another arts event “Herne Bay Creates“ – celebrating a multitude of creatives in the town, which also incorporated an interesting “gallery/pub crawl“  involving four of the local micro-breweries.

For next year, Beach Creative has initiated a collaborative exhibition with Creek Creative in Faversham and the Fish Slab in Whitstable, where there will be a travelling exhibition on the theme of Maps.

Basically, Beach Creative is trying to bring people into the town and encourage and support creativity – and not just in the visual arts. In 2017 they engaged with more than 1500 people via outreach programmes and workshops. As they say, “it’s all about people”. They feel they are a community arts centre.  Currently they have six directors, all practicing artists and all volunteers. Any profits they make go straight back into the work they do. The venue can be hired out for exhibitions etc as well – there is the Duchamp Gallery, the Marcel Gallery, Rosetti Room and Studio 7.

We were shown a fascinating short video in which one artist described Beach Creative as “an eye opener”. They added that they never knew such a facility existed! Another artist described it as a “Thriving place to be”.

The building is still owned by Canterbury City Council and at the moment Beach Creative leases it as the council decided not to demolish. However, they only have a one-year lease which makes it difficult for their projects and planning. At one point the rent had shot up from £3,475 p.a. to £20,000, but thankfully this was reduced after they managed to show documentation about all of the work that they do. Rent has returned to previous levels, but the 1-year lease remains an issue.

The Directors love their building but they feel they are living on borrowed time as the Council are unsure about what they want to do with the building called “Beach House”.

Beach Creative has had a huge impact on the local community and helped develop local creativity. We very much hope that it will continue to develop and do its good work and congratulate the team on their efforts to date

You can read more about some of the artists here.

You can watch their video here.