Boxing & barbecue event at the Prince of Wales Youth Club 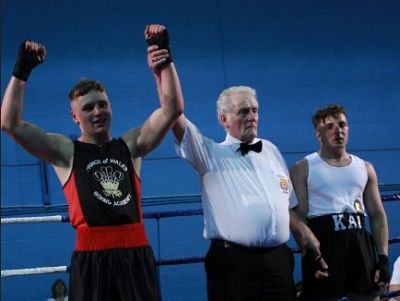 The Prince of Wales Youth Club (POWYC) in Canterbury recently hosted its first charity boxing show with support and promotion from our Club.

The youth club was filled to capacity with spectators who were treated to an exciting evening of youth boxing, topped off with a freshly prepared barbeque meal.

There were twelve junior and youth bouts and one senior contest in total, with four youngsters from the POWYC boxing academy taking part. They were joined by youngsters from a number of other clubs in Kent, including Sittingbourne and Gillingham. The audience was incredibly enthusiastic and cheered the young fighters as they moved around the ring, trying to dodge each other’s punches – all carefully watched by referee Geoff Cannell and judges Ian Bourner, Wayne Armstrong and Kev O’Rourke.

The MC for the evening was Rotarian Peter Hermitage (Past President of the our Club). Celebrity guests who helped the Rotary Club’s President, Sharon Jordan, make the presentations of the City Awards-sponsored trophies included former Kent and West Indies Test cricketer John Shepherd and ex-professional boxer Johnny Kramer – a three times southern welterweight and twice southern middleweight champion, who fought on the Muhammad Ali-Henry Cooper bill at Highbury in 1966.

“We are totally delighted with the success of the evening,” said Peter, reflecting on the event. “Not only did the youngsters put on a fantastic show, but we managed to raise funds which will help the POWYC continue to carry on its important work, which is a challenge in these days of limited funding for youth clubs. Boxing is a sport that helps youngsters improve discipline, develop sportsmanship, and have a positive focus for their energy. On top of this the evening was a splendid opportunity for members from all walks of the community to come together.”

There was also a raffle at the ticketed event, which added to the funds raised during the evening. The evening’s proceeds – some £5,000 - will be split between the POWYC and our club; our funds will be used to support our numerous local and international causes.

Our club has supported the POWYC since it was founded in the 1930s. Four of the POWYC’s current Trustees are Rotarians – two, PP Tim Brett and PP Mike Talbot are active members of our Club, while Phil Abbot is a member of Canterbury Sunrise Club and Jo Nolan is a member of the Forest of Blean Rotary Club.

The Rotary Club of Canterbury also recently gave a donation to the POWYC (used to buy sports equipment) to support its good work and its fully inclusive community boxing academy. As well as boxing the youth club has a range of other activities for youngsters, including its Junior and Senior Youth Club, play schemes and summer projects, workshops, residentials, community projects, DAPA Dance Academy, judo club, taekwondo club and many others – with new initiatives planned for coming months, including Russian martial arts, peer mentoring and CXK’s Prince’s Trust programme. The POWYC is being championed as a major stakeholder in children’s and young people’s lives.

Picture: Referee Geoff Cannell raises the arm of Henry Skinner in triumph after his second round stoppage of Kai Langford in his debut bout. Picture credit: John Gichigi.