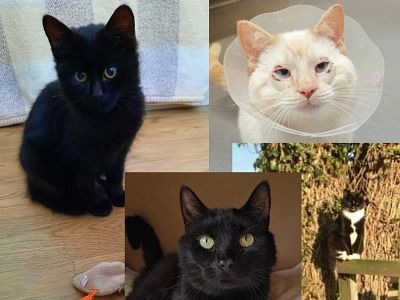 Who knew that there are cats with "alternative lifestyles" that need "alternative homes"? We learnt about this and a lot more about the Canterbury & District branch of the RSPCA when we were joined by Sarah Merrington and Lin Long from the local charity.

We are a nation of animal lovers and almost everyone is familiar with the RSPCA - but our Members weren't all aware of how the local branch works and how it is so dependent on the local community for support.

Sarah has recently joined as the branch manager while Lin has been a staff member for around eight years; before this she was a volunteer. Both are incredibly passionate about the work they do - as was very apparent during their Zoom presentation which they did in tandem.

Sarah started by telling us about RSPCA's mission: "To ensure animals have a good life by rescuing and caring for those in need, by advocating on behalf of all animals and by inspiring everyone to treat them with compassion and respect."

The national charity is well known for rescuing animals, prosecuting those who mistreat animals, as well as campaigning and educating about animal welfare. It has a central office and it owns a number of animal centres.

There are a number of local RSPCA branches around the country. In Kent there are 10, with the "patch" served by the Canterbury & District branch being the biggest in the county. The branch often works closely with other branches such as Folkestone.

The local branch, which will be celebrating its 60th anniversary next year, is run totally independently from the national charity. Although it does get a small amount of support from there, it has to get the rest of its support itself; a lot of this has usually come from its network of charity shops. The branch is active 24/7 and has a very dedicated team of volunteers and staff who all focus on Rescue, Rehabilitation and Rehoming. In the last 12 months alone the team has delivered 187 cats to new homes. At the moment the branch primarily supports cats and small animals from its local shelter. Over the last year they have found that talking to the public has proved very important - especially in their push to have animal workers recognised as key workers during the Covid crisis.

Sarah handed the floor over to Lin who told us more about their day-to-day work. The charity is licensed to take in animals but, contrary to what many may think, inspectors have to come through the national offices. During the coronavirus crisis the branch has faced increased demand from the public - for instance, many people have become ill or passed away and their pets have needed to be looked after or be re-homed. There's also been an increase in abandonment due to "affordability" -  families struggling to make ends meet have sometimes abandoned pets. Over recent months the charity has worked with other local charities - including Canterbury Food Bank - to help families that need support by supplying pet food.

Lin told us about some of the cases that they've worked with (see picture). The first was that of a beautiful black kitten nicknamed "Lucky". A group of farmers had contacted them after finding a shoebox with the kitten inside it. Lucky was in a very poor state. Despite Lin having worked long shifts, when she saw the forlorn kitten she thought: "I have to get her to the vet NOW". It turns out that trip was just in the nick of time. One more hour, and the vet said the kitten would not have survived.

The second case was "Stig" - a black cat that people had observed limping around the local area for a month or so. A volunteer rescuer finally managed to get Stig - it turns out the unfortunate creature had an open fracture on its back leg. Stig was rushed to the vet who gave emergency pain relief. Sadly, the badly injured leg had to be amputated - but we learnt that cats are very resilient and that Stig is now getting on just fine with three legs!

Lin told us that operations such as the one that Stig needed are expensive - easily costing over £800. The charity often relies on getting funding through appeals to the public via social media. Unfortunately, vet bills are "ever increasing".

The third case was of another endearing cat - a yellowy-white one called "Colonel Mustard". Mustard had ingrown lashes causing terrible discomfort and pain; the staff were able to get the cat operated on and now "for the first time in its life, it is pain free".

From Lin we learnt all about "5 freedoms" that all animals should have:

Lin also gave us more information about "cat friendly re-homing", a strategy that they use that means that an animal's time in care is as short as possible. This was when we learned about "alternative lifestyles". Apparently, "not every cat wants to sit by the fire and cosy up". Some cats are "free spirits"...or even "rogues"! The RSPCA assesses each animal and rehomes appropriately, so that the needs of individual cats are met. We were shown a picture of "Stumpy" - a black and white cat that loves his freedom but isn't too fond of people. Stumpy is happy as long as he has somewhere he can wander around and has a regular supply of food and water.

Lin handed back to Sarah who told us how they were coping over the last year. Where, one year ago, there were 10 branches of their charity shops, now there are only three (in Herne Bay, Tankerton and Whitstable). This decreased trend was seen even before Covid, but Covid has made things worse. There is a hope to open more shops, but everything is now dependent on the Covid situation.

Naturally, this decrease in shops meant that the income they'd previously relied on has gone down considerably. Over recent months they've had to rely on government support and make use of the furlough scheme. The National office has also given emergency support. Although their shops are currently still closed to the public, the branch's work hasn't stopped thanks to the internet and social media. From May they hope to be able to sell via eBay.

They are well aware of a need to diversify income and are exploring other avenues relating to this. But it is vital that awareness of their work increases among the the public - so that the local community knows they are very much a LOCAL charity providing support "straight to animals on our doorstep".

There are several ways that we, the public, can help:

Although the local branch currently focuses on cats and small animals, they would eventually like to expand the species they can support to dogs and birds. They already have enough land to expand, but not the buildings, so it would be great to get support from the community and local businesses.

Finally, Sarah mentioned how, inspired by Captain Tom's 100 Challenge, they would like people to do 100 things to help raise money for the RSPCA. There's more about this on their social media (see details below). They also need volunteers for the charity shops (when open again) - "even if you can only do a couple of hours a week".

Ending their talk on an optimistic note, Lin stated "I have every faith in our community," and thanked us for having them. Rotarian Dee Mepstead led the vote of thanks.

If you are able to support the charity by giving donations, in-kind support, volunteering your time or helping rehome an animal do get in touch with them below and follow them on their social media. They would particularly like to hear from businesses that would like to build a corporate relationship with them or that can provide in-kind support.