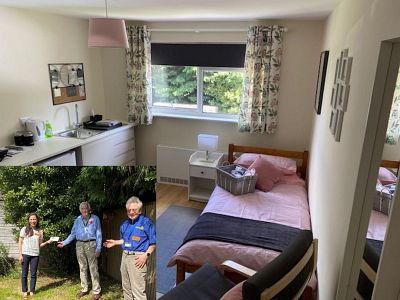 Our Community Service Committee (one of three main service committees of our Club) decides on our community activities and support. On occasion we invite people who have approached us to give a presentation about their work.

Today we heard a presentation from Cantercare, which is a Canterbury-based charity that was set up in 1992 to provide supported housing to young women that are pregnant or have a young baby.

Cantercare's ethos is that young women have a choice to keep their baby; their aim is to support such women by providing safe, secure accommodation at a time, for many, that is very difficult.

The charity owns a six-bedroomed house in Wincheap (Cantercare House) which can accommodate six young women and their babies. Accommodation for each woman comprises a bedroom and shared facilities (such as kitchens, bathrooms etc.). This means that the women have to be able to get on with one another even though they may be stressed and are adjusting to big life changes - something that can be a challenge for the charity staff who provide family-style support and encouragement. Currently there are four part-time project workers and a manager, so that someone can stay with the youngsters every night.

While at the house the women have a one-to-one keyworker as well as more informal relationships with other staff. They are given help and advice on parenting, relationships, budgeting and other life skills that will help them become independent. In some cases there is a need to break a cycle of poor parenting; while at Cantercare many of the young women are able to build relationships with their families - which increases the chances of ongoing support.

As part of an education and training pack the women are also taught skills that will stand them in good stead when they are eventually ready return to studies or enter the workplace, such as how to write a CV. Some previous tenants have gone on to college or even university.

Young women who are homeless or face impending homelessness from areas near Canterbury, Herne Bay or Whitstable ("Canterbury & Coastal") aged between 16 and 21 years old are referred to Cantercare by a number of agencies; they can come at any time during their confirmed pregnancy and stay until the baby is 18 months - though most only stay until the baby is a year old. The accommodation is available to those of all faiths and none.

Roughly a third of referrals come from Canterbury City Council, a third from social services, and a third via other agencies (including a small number of self-referrals). The young women are offered accommodation after passing an assessment interview by the organisation to see if they are suitable candidates; the high demand means Cantercare have to offer accommodation to those in highest need first (e.g. individuals nearest to giving birth).

The charity has good relationships with Canterbury City Council and works via a "nomination process" to help the girls get council accommodation; however, Cantercare cannot hasten the normal process. The women apply for housing when they enter Cantercare but this application is suspended until the charity thinks they are ready to live independently, at which point they are nominated. Cantercare then helps the girls through the process and keeps in touch once they have moved.

The charity costs around £110,000 to run per year; the women can claim housing benefit and they pay a small service charge. Other funding is required to keep Cantercare going. The charity, which is a Christian one, initially received funding from churches but when it became in danger of closing it sought government funding under their "Supporting people" grants. But pressures on government funding and a change in how funding is provided has made the charity's financial future less certain.

Funding is decreasing and changing; for instance there is increased pressure to prioritise young women aged 16-18 years old. As well as needing core funding, the charity needs funds for specific projects - such as refurbishing the property.

Our Club has already supported Cantercare with items for a raffle held at their recent 25th Anniversary fundraising quiz night. Following the presentation our Community Service Committee agreed that we would like to help Cantercare and will be sending a team out to see the best way in which we can provide our modest support.