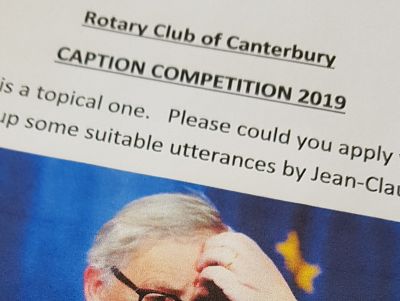 It's nice to be able to have a little fun while raising money for good causes, and this we did in a small way as a result of a Caption Competition (for members) organised by Rtn Bob Anderson.

Bob had hunted around for a fun picture for the competition - and finally found a topical picture of Jean-Claude Juncker, with hand held to his forehead. Members were to suggest captions for a small entry fee.

Naturally, Brexit was on most people's minds (including Mr Junckers, no doubt) so it was no surprise to Bob that most of the entries seemed to refer to Brexit or the EU. Here we list just a few:

As Presdient Margaret had sent in a family entry, the competition was judged by PP Martin Ward, described by Bob as "a man of broad competitive experience from his BBC connection with Strictly and the Eurovision Song Contest".

In announcing the result at a recent meeting Martin said the task had not been easy (possibly not helped by news about Brexit shifting on a regular basis). In the end he opted for best "chuckle factor". The winning entry came from Rtn Julie Reza who carefully dodged any references to Brexit, with Juncker exclaiming, while tapping his forehead, "Drat, I know I should have got Tim Brett to buy my lottery ticket!" - a not too subtle reference to the in-house joke that PP Tim Brett frequently wins the raffle that we hold at meetings.

Bob expresses his many thanks to those who entered – in all we raised just under £50 which will now go to the President’s charities as a result of the competition.