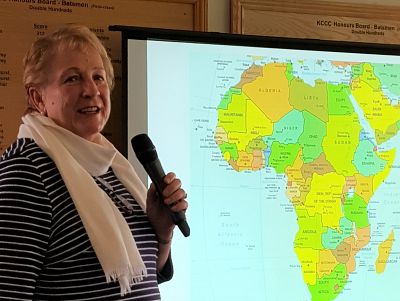 It’s always a great pleasure to hear how our donations are used – and yesterday we had a wonderful opportunity to hear first-hand from Dr Michelle Hamer about how our modest donation has helped a Kenyan hospital that serves the poor.

Michelle, who originates from Nîmes in France, is an anaesthetist who volunteers at Cottelengo Chaaria Mission Hospital in Kenya. Chaaria hospital is a rural hospital that lies around 16 km southeast of a Meru town which is near the foot of Mount Kenya National Park. Interestingly, Michelle’s involvement with the hospital came through a Rotarian connection from Malta.

After studying medicine in France Michelle came to the UK (London) to specialise in anaesthetics and intensive care. She subsequently worked for several London hospitals before moving to Dartford where she worked as a consultant for eight years. From there Michelle moved to Ashford, working at the William Harvey for around 20 years. She retired last December but continues her involvement with Chaaria hospital.

Kenya lies on the equator and borders countries including Somalia, South Sudan, Ethiopia, Tanzania and Uganda. Despite being a tropical country, it’s also very arid in places – Michelle illustrated her talk with plenty of pictures showing the conditions that healthcare workers (and their patients) encounter out there. The hospital’s nearby town of Meru is quite busy, but very poor. The tarmacked road out of the town soon becomes a dirt track, covered in red dust. It is along this route that many patients make their way to Chaaria hospital – some on local means of transport such as minibuses and ‘pikipiki’ motorbikes, while others get there on foot. The preponderance of motorbikes and the poor road conditions mean that there are often road accidents and road casualties; these casualties frequently end up being treated at Chaaria.

The hospital itself was founded by the Cottolengo Brothers (a Catholic religious order with origins in Italy which also has activities in South America, India and Africa). The Brothers initially opened a dispensary and home for handicapped boys. Soon after a mobile clinic was started. But the year 1998 proved to be a turning point for the hospital when Brother Dr Beppe Gaido (a specialist in HIV and infectious diseases) travelled there, and out of necessity a hospital started to evolve. Now the hospital provides a wide range of services – including services such as antenatal care, dentistry and immunization – to the wider community. The hospital is administered very competently by Brother Giancarlo.

The hospital aims to help patients with no money, that have been turned away from other hospitals, or that have developed complications that other facilities have been unable to treat. Officially it has 160 beds – but in practice additional mattresses and bedding in corridors means that there are many more patients at any one time. The outpatient corridors are packed with patients waiting for treatment (there are no appointments). Only one of the two operating theatres is in a good condition.

The female ward in the hospital is very basic, with beds packed very close together – meaning there is a high risk of infection and cross contamination and reliance on antibiotics to prevent infection. The male ward is even tighter by virtue of the fact there are more male patients because of trauma from accidents and other pathologies. The paediatric ward is also very crowded, and mothers usually stay with their children during their stay. The hospital has a new labour ward with three delivery beds side-by-side – but there is no privacy. There are no separate cots for newborns – instead they sleep beside their mothers on maternity beds. There are two incubators for premature babies and babies suffering various serious health conditions.

In total, the hospital in manned by around 100 clinical and non-clinical staff (the latter including cooks and cleaners). Dr Beppe is the one permanent medic/surgeon. There is also a government funded doctor at the moment – but funding for this post is precarious. There are two anaesthetists, five clinical officers (nurses with training) and one occasionally visiting surgeon from Meru hospital. The only other staff are volunteers. Anaesthetists have 18 months training – six months general nursing training followed by one year in anaesthetics – and are technically very adept. (Michelle contrasted this with her seven years initial training plus 10 years postgraduate training). Dr Gaido has become an expert in obstetrics, general surgery and trauma as well as other disciplines in order to provide the care that the patients need.

In 2014 the hospital treated around 16,000 outpatients; last year this number soared to over 33,000 due to a strike in Meru hospitals for the best part of the year. There were also over 13,000 inpatients. In total around 5000 operations were performed, there were around 3000 deliveries and 1000 caesarean sections were carried out. Again, the contrast with statistics from William Harvey Hospital in Ashford was stark – the latter carries out around 4000 deliveries with 10 obstetricians plus a large number of anaesthetists and midwives, while Chaaria hospital relies largely on one doctor, a few midwives and some volunteers.

Michelle found many challenges while working out there. Facilities are basic and modern anaesthetics and equipment are often unavailable. Spinal anaesthetics are given without sedation. In the operating theatre the medical gases are only available in cylinders, which can run out during the procedure.

Michelle showed us a number of striking pictures – the total length of anaesthetic tubing available is substantially less that the length of most people’s washing lines; re-used ‘disposable’ airways; airbags repaired with tape; limited choice in sutures – and a reliance on silk, which is known to be associated with wound infections. (With our donation, which Michelle thanked us for, the hospital was able to purchase dissolving sutures which have less risk of infection.)

In three weeks recently spent out there Michelle dealt with nearly 100 cases, working for 12 hours a day, six days per week. The patients were poor, often malnourished and many were HIV positive. The patients have a tolerance for very low levels of haemoglobin (Hb) (they are often walking around with Hb levels that would hospitalise a patient in the UK); they also have remarkably high pain thresholds and tolerate spinal anaesthetics very well.

Despite the challenges, Michelle found the work enormously rewarding and would encourage others with medical/clinical skills to volunteer out there. The hospital (which never goes on strike) desperately needs more funding and more staff to remain sustainable and be able to respond to the growing needs of the community (including patients who may travel very long distances, sometimes on foot).

For further information (in Italian) about the hospital please visit its blog.