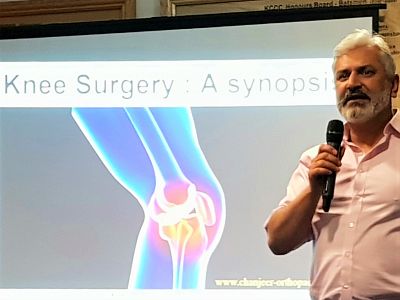 When knee surgeon Chan Jeer came in to talk to our members on Tuesday about ‘dodgy knees’ he certainly found a captivated audience.

Chan is a Kent-based orthopaedic surgeon that specializes in knee surgery and sports-based medicine. Born in Hillingdon, Chan qualified in medicine from King’s College Hospital School of Medicine and Dentistry (London) in 1993. During his subsequent training (1993-1997) he did his surgical rotation in Canterbury; his senior training was also in South East Kent.

Chan started his talk with a little bit of information about himself, which gives some insight into the personality ‘behind the surgical mask’. Chan’s parents came to the UK from India in the 1960s and both he and his brother, born in the UK, did well in their studies; his brother is a now successful cosmetic dentist in London while Chan, after working for the NHS, now works privately. With a smile on his face, Chan lists his passions as: three Neopolitan mastiffs, vintage cars, his children and “one understanding wife”. His children are in local schools and are high achieving too; he is a keen boxer and this love of sports is something that his children have also picked up.

Most surgeons travel in order to get international experience and work with world leaders. In Chan’s case, after doing his training in Kent he travelled to Adelaide. There he learned to do orthopaedic surgery at the busiest orthopaedic hospital in Australia. He worked with some of the leading arthroplasty and sports medicine surgeons, performing both hip and knee surgery.

Chan is now less of a general orthopaedics surgeon; he currently only does knee surgery – e.g. knee replacements and arthroscopy. Chan therefore went on to talk about knee problems, reminding us first how one limb can affect another with the good old skeleton song ‘The hip bone’s connected to the thigh bone…’ etc! He showed us pictures of knee anatomy and informed us of the knee’s complex function compared to the hip – the knee rotates, pivots and bends. As well as knee bone structure, one has to consider the soft tissues, muscles and ligaments.

Knee replacements are often needed due to osteoarthritis. Basically, this is painful, chronic joint degeneration. As joints get stiffer muscles are used less, causing muscle atrophy (muscle wasting away), which sets a vicious cycle in place.

Some of the key symptoms suggesting the need for knee replacement were listed as follows: severe pain, swelling, stiffness. These all eventually lead to a loss of knee function. Unlike pain in, for instance, the shoulder, knee pain can have a severe impact on lifestyle and mobility. “Bad knees,” says Chan, “are not well tolerated”. He spoke of a “gnawing, unremitting pain”. This is due to cartilage being worn away and nerves in the bone giving pain. For Chan, this pain gives a clue to pathology (the cause of the condition), with the location of pain helping with diagnosis.

Unfortunately, such knee problems do not go away and cannot be reversed, although decreasing body weight can reduce symptoms. Usually patients have an increased need for analgesics (painkillers) and find they have reduced walking distance because of the knee pain.

Risk factors (characteristics that increase the likelihood of needing a knee replacement) are: being female, aging, being overweight, joint injury, malalignment (e.g. knock knees), occupation and recreational factors, being inactive, family history and a condition called Heberden's nodes (that causes swelling of the tip finger/toe joints).

Chan went on to describe ways in which individuals can help themselves – the first being to lose weight. Studies show that a BMI (body mass index) of more than 30 increases the risk of knee arthritis four-fold. Physiotherapy can also be of use. Simple pain relief in the form of anti-inflammatories can help, but again studies show that long-term use of non-steroidal anti-inflammatory drugs (NSAIDs) can give problems with long term use. Even topical NSAIDs that are applied to the skin surface can cause problems. Another problem with painkillers is that they can become ineffective with long-term use.

Chan spoke briefly about arthroscopy - a technique in which an instrument is surgically inserted into the knee, aiding diagnosis and sometimes allowing some repair of the knee. Although this can help some patients, this cannot cure severe arthritis.

Other interventions described by Chan include steroid injections, use of stem cells, lifestyle changes, ‘blood PRP’ and injection with a drug called Monovisc. While there is evidence that steroids can help in some cases, these can lead to immunosuppression (i.e. a less active immune system) which can cause other health problems. Stem cell therapy is relatively new and evidence supporting its use is still poor. Lifestyle changes include avoiding impact exercises and stairs. Blood PRP also has poor evidence. While Monovisc can reduce arthritic pain for to six months, it’s not available on the NHS. Chan also mentioned that evidence for the use of the supplements chondroitin and glucosamine is also poor. Unfortunately, none of these interventions can reverse the arthritic process.

Chan statistics on his surgery are remarkable. Last year, he estimates to have replace 500 knees. As Chan states: “I know it works…it’s the best way of improving quality of life in those with arthritic knees.” However, there is no guarantee that a patient will be happy with the surgical outcome. Some pain and stiffness can continue to limit what patients can do, and Chan reported that around 20% of patients have some level of dissatisfaction. Risks of the surgery include the possibility of infection and blood clots.

Therefore, risks and benefits need to be weighed up before surgery. However, the operation itself, although major, is relatively quick (taking about 1 hour each). The surgery can be done under a general anaesthetic, though more commonly these days it is done with a spinal nerve block/sedation. In the operation the arthritic parts of the bones in the knee joint (and sometimes also the knee cap) are removed and replaced with an artificial replacement (a ‘prosthesis’, which Chan showed us). Most of these are made of cobalt-chromium, sized to the individual patient.

Patients need to be medically fit. After surgery, they will need 6 weeks before they can return to activities such as driving, and it can take up to one year for full recovery. During this time they will need to have had intense physio.

Reflecting on the history of knee replacements, back to a time when things like ivory were used, Chan reminded us how changes in technology have led to the modern, hardwearing prosthesis. He also pointed out that surgeons are always finding ways to improve surgery – though not always with great success. Although minimally invasive surgery is now possible, this is harder for surgeons to perform, resulting in malalignment, meaning this has now fallen “out of fashion”. Computer-aided surgery is possible, but has now largely stopped because of high error rates. Robotic knee surgery is not well established as yet. It still needs human supervision – however, in the future, this may have a place in treatment of osteoarthritic knees.

Chan briefly mentioned some techniques that he doesn’t do. For instance, he does not carry out ‘high tibial osteotomy’; this procedure straightens the knee through breaking it and conducting further operations. Chan would rather do the single knee replacement operation. He also doesn’t carry out partial knee replacements because of their relatively high failure rate (10-20% at 10 years).

Finally, Chan spoke of ways to improve surgical outcome. One is to find an experienced surgeon by visiting the national joint registry, and also to seek a theatre with laminar air flow (where air currents reduce the chance of infection). Another is to be fit as possible prior to surgery, and to have early mobility after surgery (e.g. through a rapid recovery programme). Of course, the entire surgical team is critical – a dedicated anaesthetist, excellent scrub team and a ‘clean’ hospital with good hygiene practices and standards all help improve the surgical outcome. As Chan stated, the estimated time that a new knee replacement will last ranges from 15-20 years in someone of normal bodyweight – and even longer if someone is slim and strong. This really makes a difference in those with knees badly affected by osteoarthritis.