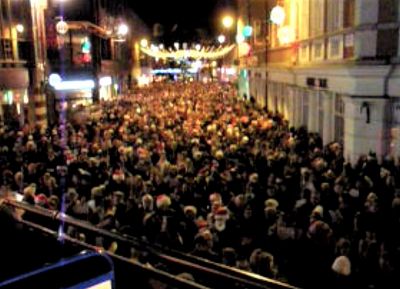 Rotarians joined thousands of others in Canterbury on Christmas Eve to join in with open air carols in Rose Square.

It was a wonderfully atmospheric event, with all the traditional carols such as We Three Kings of Orient (Star of Wonder) as well as seasonal favourites such as Rudolf the Red Nosed Reindeer. Conducting the music was Professor Grenville Hancox, Honorary Professor at the University of Kent at Canterbury. The Archbishop of Canterbury, along with the Bishop of Dover, both happily joined Lord Mayor Rosemary Doyle in the sing-along-event. (Both the Archbishop and Rosemary are honorary members of our Rotary Club.)

The retiring collection for the Lord Mayor of Canterbury's Christmas Gift Fund was AMAZING - £5,357.24 (which the organisers diligently counted by hand after the event). This is used to buy gifts for the elderly and needy in the local area. Thank you to everyone who came along and made the evening so enjoyable, and to all who gave so generously.

Picture: A still from a video clip of the event, showing the tremendous support for the event. Picture credit: Sheila Cragg.