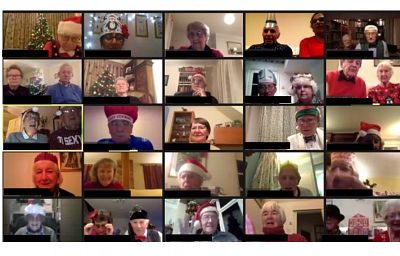 This year, the build up to Christmas has been different for most of us - and so it was with our Rotary Christmas party the other day - held, like all our recent meetings, by Zoom.

"There are some strange faces here," said President Alan Mepstead at the start of our gathering - and of course that was because our Members had joined the party wearing an assortment of hats. While Santa's floppy red & white hat was definitely the most popular option, we also had dancing penguins, Xmas puddings and serene winter scenes depicted on hats. The party was well attended, and it was lovely to see spouses and also a number of Rotarian widows joining us.

But we kicked off in traditional style with Members singing "The First Noel" - quite a unique experience of Zoom; we're not quite sure if we've worked out the optimum way to do it as, with everyone unmuted, Zoom would pick up different singers at different points!

Richard Kemball-Cook then told us of his cycling around the city (during which he dropped off various cheques to five local charities - we hope to have a piece about that soon). "It was lovely to go around the City on our bicycles" said Richard.

Alan delivered his first joke of the evening: "What does Santa get if he gets stuck in a chimney?" he asked. "CLAUStrophobia" was the answer - met with a fair number of groans.

Next, Members sang the traditional carol "God Rest Ye Merry Gentleman" - a carol said to date back the 16th Century.

Peter Hermitage next gave us a lovely little Christmas presentation, "in the style of Alan Bennett". The star of his presentation was one of our duck race ducks ("EGGbert"), who recounted the story of how our duck race started. Lots of little anecdotes were mentioned, including the time when a number of the ducks were found to have duplicated numbers ("Oh, the indignity of having the numbers erased", said Eggbert). Eggbert told us how corporate ducks, wearing red, had joined the race (they think they are so superior," said Eggbert, "but, just like the rest of us, they sit piled up in a carboard box for most of the year).

Next, we had the pleasure of another of Alan's jokes - met with more groans of laughter. "I'm trying," said Alan, "and some would say I'm very trying," he quipped.

A rendition of "Christmas Day in the Morning" was followed by a reading out loud of Dave Calder's "On the 13th Day of Christmas..." - a wry commentary supposedly from the true love recipient of the preceding 12 days of Christmas gifts. "The kitchen is crammed with cows and milkmaids and smells of a million stink-bombs and enough sour milk to last a year," it goes.

After singing "O Come all Ye Faithful" Alan asked "Who do Santa's helpers call on when they're unwell?" - "The National Elf Service of course" (boom boom!)

Mary McGeary, who is Scottish and has lived abroad for many years, then told us of her experiences of celebrating Christmas in different ways. "Christmas is a magical time," she said, "but to share this one you're going to need your passports". We heard about Christmas in Scotland, Belgium. Dubai & Australia." Fasten your seat belts," she told us. But she started with what seemed quite a serious question: "Tell me, have any of you broken the law?" Apparently, many of us had! It seems that before 2000 there was an old law that forbade the eating of mince pies on Christmas day (though we're not quite sure if that's a myth).

From Mary we learned that Christmas Day did not become a public holiday until 1958 in Scotland (the 31st being their big holiday). Nevertheless, as a "lass" she'd have a magical time out dancing with her friends - in fact, she met her husband at one such event.

In Belgium she'd celebrated a continental Christmas - the special meal (of oysters, salmon and Christmas logs) being on Christmas Eve. They would listen to King Albert at 5pm and then visit different homes and exchange Christmas fare (including Clootie dumplings). Presents were small - most having been given on 5th December, the evening before St Nicholas' Day.

In Dubai the family would make pavlovas and have a family quiz. While she would celebrate "Christmas" in the middle of their winter - 25 July - with her family in Australia. "Why can't we do Christmas on the 25th July this year?" she suggested. It's what she plans to do.

Alan thanked Mary for her tour and Dee Mepstead told us of one of Christmas experiences in Malawi - when a dog had run off with the Turkey!

Alan's penultimate joke: "What does HM The Queen call her Christmas broadcast?" - "The ONE show"!

Finally, David Lewis told the story of a little Christmas miracle when a newly delivered child had, after a difficult delivery, shown no signs of life until nurses passing outside were heard singing Hark the Herald Angels sing". The baby had moved! "What joy for that family!" he exclaimed.

And then we had Alan's last joke of the evening: "What do you call buying a piano for the holidays?" - "Christmas Chopin"!

With that, Alan drew the party to a close "I make it 2 laughs and 15 groans," he joked. To which an unnamed heckler retorted "Alan - you make a better President than comedian".

We ended singing "We wish you a Merry Christmas," led by Roger Power, grateful for a chance to enjoy each other's company.