A fun Christmas quiz for our Members 2020 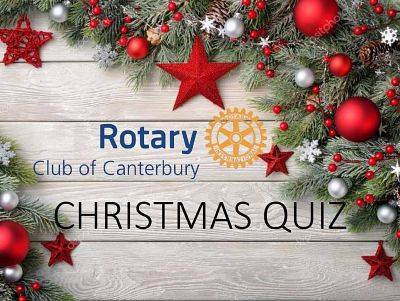 Our Members enjoyed a Christmas cracker of a quiz over Zoom the other night thanks to PP Peter Hermitage challenging us on a range of seasonal topics - from Santa's outfit to Dickens' books.

Peter had asked Members to "have a mince pie, glass of something and a funny hat" at the ready and to gather as many of our household as we could around our computer screen; it was very nice, therefore, to welcome the presents (!) of various spouses...and quite a few hats were on show, though some more summery than seasonal. One Member had even improvised a bright red nose for Rudolf, using a well known chocolate wrapped in shiny red foil!

We were told there would be six rounds of ten questions and a bonus round of five to test our observational skills; we had the opportunity to play our joker too for double points...so pencils at the ready, we settled in for the seasonal show down.

First, though, Peter kicked things off with a bit of festive music via his impressive multimedia presentation...which led us nicely to his "Santa"-themed round. He kicked off with the challenge of identifying who played the elf in the 1985 Christmas classic, Santa Claus, The Movie. A few more questions about Father Christmas followed (including the challenge of naming two of Santa's ORIGINAL reindeer).

Next was the "Music" round, and to get us ready for that we were encouraged to join in and sing the chorus of "Grandma Got Run Over by a Reindeer". The questions that followed ranged from identifying folk singer Burl Ives to the "more modern" (!) band Slade. With some of the tunes, our Members were very much forced to play it by ear!

More music came in the form of a rendition of the 12 days of Christmas. From the nodding of heads and the mouthing of words it seems a few of our members were joining in at home, mutely, although one Rotarian (who shall remain nameless, though we were bowled over by his festive feistiness) forgot to mute himself, much to the mirth of the rest of us! The song finished and Peter asked us who inspired the line "11 pipers piping" ("a football team", shouted one cheeky Member, trying to mislead others) and what birds were there 4 of?

We moved onto "Geography", and were asked to identify various places around the UK shown in several festive and not-so-festive pictures. The "Christmas Entertainment" round had us scratching our heads over who played "Rodney" in "Only Fools and Horses" and who voiced the character of the conductor in the 2004 computer-animated film "The Polar Express"?

The "Commercial" round had us in a tinsel-tangle over various logos and ads, including identifying shops featuring a cute carrot and a man on the moon in their Christmas ads.

The penultimate round returned to some higher culture, asking us to name the current poet laureate and identify the Charles Dickens novel:  _U_ M_T_A_ F_I_N_.

The bonus round then got us looking at a picture before testing our observational skills...and finally identifying two of our Members in photos, including one of a Member asleep in a woolly hat!

Peter then gave us all the answers before asking for our "scores on the doors" in his most gameshow-like voice. Roger & Sandra Power and newbie Shabana Raman jointly came top with 59, followed by Mark Rosen with 53. President Alan Mepstead congratulated the winners on their starry brilliance before confessing, sheepishly, that he felt a "rather ignorant" contestant (oh deer!) Prizes will wing their way to the winners post-lockdown, perhaps with Santa's help if they've been good. In the meantime, our heartiest thanks to Peter (& wife Brenda) for giving us a lovely evening of merriment at this most punderful time of the year!

How many did you get?