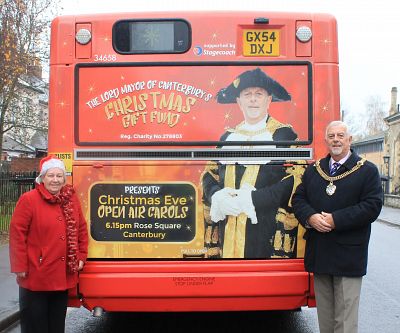 It was a great pleasure to hear from our invited speaker, Sheila Cragg, about The Lord Mayor of Canterbury’s Christmas Gift Fund and Rotary’s historical involvement with the Charity.

This year the organisers will send out about 500 grocery parcels to people in Canterbury and the surrounding villages, each containing a greeting from the Lord Mayor. The beneficiaries are the elderly, the lonely and others that are in need (of any age). Many of the recipients this year will be families with particular needs; the Fund plans to give toy vouchers to the younger children.

Sheila is currently Chairman of the Fund, a role she has been in for the last 13 years, since taking over the role from Rotarian and Past President of our Club, Tim Brett. The local Charity was established in 1952 and of course Sheila reminded us that Rotarians had been involved in setting it up. Four businessmen had come together at the outset: Sheila's father, Warwick Elvy - who was then a very new Rotarian and the proprietor/editor of a local newspaper. Rtn Harold Young had served as President of Rotary RIBI in 1946 and the President of the day was Rtn Arthur Wilson, while Rtn Jack Barrett was the Mayor of the day.

Sheila told us that it is in no small part thanks to support from our Members that the Fund has continued to this day. In fact, some of our Members were out collecting for the Fund at the New Dover Road Park and Ride site on Saturday 1 December (see story to come soon).

Meanwhile, Sheila has been out and about promoting the Open Air Carols on Christmas Eve in the City Centre – with the help of the Lord Mayor of Canterbury and a Stagecoach bus (see picture).

For those of you who missed the collections for the Lord Mayor of Canterbury's Christmas Gift Fund, you can always donate online here.

And you can find out more about this worthy local cause here.