Our #purpleforpolio Crocuses are in Bloom 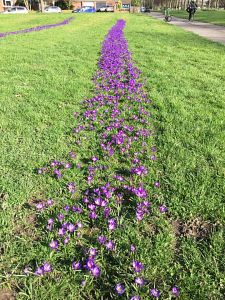 Earlier in the year members of the Rotary Club of Canterbury planted hundreds of crocuses along the Rheims Way in aid of Rotary's #purpleforpolio campaign. The recently bloomed crocuses look a picture in the spring sunshine.

Polio was once known as a devastating disease, and many older readers will recall seeing people affected by polio in person or in pictures. Thankfully, preventative global immunisation campaigns - in which Rotary and others have played a key role - have helped reduce the number of cases. But it's important to remember that the disease, for which no cure exists, still kills and paralyses children in various places around the world.

The purple crocus flower was chosen to symbolise the story of the polio eradication programme as the colour matches the dye painted on the fingers of children to show that they have been immunised. The Rotary Crocus Campaign started in Rotary International in Great Britain & Ireland. Initially millions of real crocuses were planted around the country, with fabric crocuses being rolled out nationally for Rotary Day 2013. The funds raised through the sale of the real and fabric crocuses have helped Rotary to continue its immunisation programme and its efforts to help create a polio free world.