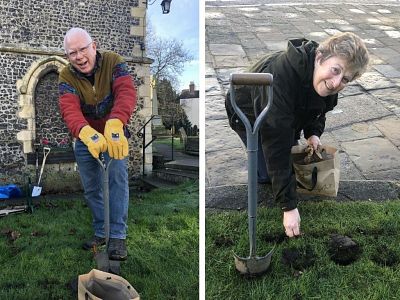 Continuing on from our work over the last few months to raise awareness of Rotary's work towards the elimination of polio from the world, PP Martin Ward and his wife, Jayne Ward, have been busy planting crocuses at St Dunstan's Church.

Back in October last year our Club marked World Polio Day together with the two other Canterbury Rotary Clubs (Sunrise and Forest of Blean) by lighting up St Dunstan's Church in Canterbury purple (the colour symbolising the fight against polio).

We followed this up by launching a purple-themed recipe e-book later that day. Then, our Members got busy selling and donating crocuses in-and-around Canterbury ... and the last task for now, completed the other day, was to plant some more crocuses in the grounds of St Dunstan's Church.  Although it's a little later than planned because of the wet and windy weather, Martin wryly remarked that his "head gardener" (Jayne) "doesn’t think they will suffer for going in later, they just might be late coming up."

They did well to take advantage of the good weather the other day to finish off planting. These crocuses are in a different position to others we have planted, in that they are in two bands on the piece of grass to the right hand side of the church door.  Do keep your fingers crossed and look out for them over this spring!

More pictures are can be seen on our Facebook page.