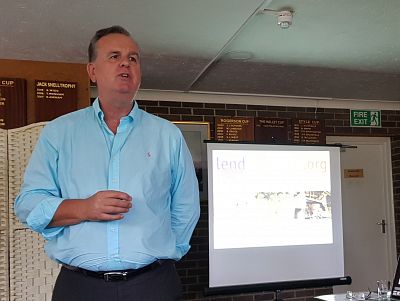 Imagine if a certain sum of money could be used again and again and again to help others. Well, that, in effect, is what the charity Lendwithcare does. Our members heard more about this charity during a recent meeting.

Lendwithcare was founded by the well known global development charity CARE International. It aims to help people in developing countries out of poverty by providing them with small loans for entrepreneurial ideas.

We were fortunate to be visited by David Evans, an enthusiastic supporter of Lendwithcare, who kicked off his talk with a stark reminder of how things have changed globally since the Second World War. Care (then the Cooperative for American Remittances to Europe) had come into being because of the extreme post-war poverty experienced in Europe; initially it was a vehicle for food parcels to be sent from the USA to the UK and other European countries. This was a reminder to us all of how fortunes of countries can change in just a few decades.

The key to what Lendwithcare does is microfinance, delivering financial services to people outside normal financial systems. It's quite shocking to realize that around 2.5 billion people worldwide, most in developing countries, do not have access to financial services (which means banks etc. via which to get loans).

Through Lendwithcare, members of the public can lend small amounts of money to small scale entrepreneurs in developing countries. Loans may be small but can be life changing. For instance, a loan of just a few hundred pounds might be enough for a woman to set up her own business.

Our Club (Canterbury Rotary Club) opened our account in May 2016. It all started thanks to the late Alan Holmes, Rotarian and member of our International Committee, who had come across Lendwithcare when his sister, Sylvia, passed away*. Since that time, based on our initial loan of £500, we have made 53 loans, helped 345 entrepreneurs and so helped 1,260 family members and created 238 jobs in the local areas.

Setting up a Lendwithcare account is really easy and the minimum contribution is an affordable £15. This money is used to support the entrepreneurs. Lendwithcare does not lend the money direct – instead it works with a number of microfinance institutions on the ground in different countries which have appropriate business experience. Generally, entrepreneurs will have an idea for a business and will be helped by the microfinance institution to formulate a business plan and develop a Lendwithcare profile.

It’s important to remember the Lendwithcare is not ‘giving’ the money, rather it is giving a loan, with the entrepreneur gradually paying the money back as their business grows. This means, say, a loan of £1000 can be spent over and over again.

The Lendwithcare website allows visitors to see the stories of different entrepreneurs, each presenting what they plan to do with the money. Lenders open an account and decide who to lend their money to – this can go to one entrepreneur or a number of entrepreneurs. Often lenders have different strategies – for instance, some like to give loans to women, others to farming projects, others to entrepreneurs in certain countries.

So, for example an £80 loan (which is a small loan as most loans are bigger) may help someone open a sweetshop. A larger loan might of £350 may allow someone to buy a sewing machine and recruit some seamstresses for a tailoring business (meaning the loan also helps generate employment!) Larger loans can help larger businesses to set up.

It's possible for lenders, if they so desire, to set up ‘teams’ – such as members of clubs and families – to see how much they can lend in total. This is also quite popular in the ‘Rotary world’, with districts coming together.

Corporate sponsorship is also possible, with lenders adding ‘Proud sponsors of…’ to their website and linking to Lendwithcare. (In some cases even though a business no longer exists – the loans keep going out, which means a business can continue to help even though it’s defunct!)

David told us that in June 2018 Lendwithcare had around 49,000 lenders around the world with £19 million lent in total (including recycled loans); nearly 90,000 entrepreneurs have been supported. Typical loans now lie between £500 and £1,000. In the last 12 months £5.6 million was allocated.

Lendwithcare does not take any money to administer the loans, though some lenders like to contribute to Lendwithcare’s running costs. The microfinance institutions may charge entrepreneurs a small fee; each institution is evaluated by Lendwithcare and needs to be ethical and have reasonable costs.

Only a very small proportion (David estimates less than 1%) of businesses fail; this is because each business plan is developed in association with the microfinance institution. In instances where write-offs have occurred this is often because of natural disasters that have affected the business, such as flooding or drought. (Thus, the loss to any lender, according to David, is very small.)

Lendwithcare itself is based on Albert Embankment, near the MI6 Building. It has expanded over recent years, but the total number of staff is still small, with most of their work being to evaluate the microfinance institutions.

The charity is currently doing well and, David reassures us, every entrepreneur eventually receives the funding that they request for their business.

*We were joined in the audience by Alan Holmes' son, Bob, and Alan's brother-in-law and husband of Sylvia, Colin Sayer. Alan had invited Colin to an International meeting to talk about Lendwithcare, after which committee members decided to set up a Rotary account.

To read a previous article about Lendwithcare click here.

Our audience on the day was joined by?? who??