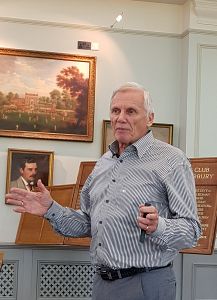 [This article describes details that some readers may find distressing.]

Often we give little thought to those who work behind the scenes following disasters – so it was eye-opening to hear David Tadd (former head of forensic investigation for the Metropolitan police) give a talk to members of our club yesterday, during which he recounted his harrowing work in the aftermath of the Tsunami on Boxing Day, 2004.

Like the rest of us, David had watched in horror as the tragic events out there had unfolded on our television screens here in the UK. But by the following day he’d been asked to write a briefing note for COBRA (the British Government's emergency response committee) about what he and his team could do to help identify the thousands who lost their lives. David had already told us that there are four ‘tools’ that help identification: fingerprints (which are unique - even identical twins don’t share them), DNA, dental records and unique physical features (e.g. a pacemaker or an artificial joint which will have a unique ID number).

The decision was made that David’s team were going to Thailand and with less than 24 hours’ notice they rushed around trying to get all the supplies they felt they might need out there – from fingerprinting kits and protective clothing to bottles of drinking water (they had no idea of what conditions they would face out there). So much stuff had to be taken that David said he was 378 kilos overweight. Luckily, the airline appreciated what they were doing and made no charge. David's team (a forensic photographer, four fingerprint experts and four crime scene managers) all set off for Phuket on an almost empty plane, arriving at 10 pm.

Understandably, there was a lot of confusion and uncertainty on arrival, given the region had just suffered a major disaster with so much death and destruction. Fortunately, a rapid response team from the Foreign & Commonwealth Office collected them. The next day the team eventually managed to make their way to police HQ. From there they were taken to see the bodies - 5,600 of them – laid on sacred ground in a temple, but exposed to the air and 80 degree heat. The smell, David said, was overpowering, and could be detected from their helicopter when it was still one thousand feet in the air.

There they met teams from 30 other countries – including a 100+ Australian Federal Police team. With so many nationalities and viewpoints it was hard to agree on what to do. But eventually the British team was able to chair a meeting and roll out a plan of action. The first thing was to get each body carefully bagged with a unique reference number and moved into cold storage in ship containers.

The teams then carried out post mortems, looking out for the four modes of identification. Bags were opened and the bodies photographed, a description of each body was noted and valuables in the body bag were stored separately (but with the same unique reference number). Each body was fingerprinted - a very difficult task given the nature of what had happened, the conditions and the time that had elapsed; nonetheless over 3,500 bodies yielded prints. The bodies were then worked on by the DNA team, taking samples from the femur (the deep muscle tissue sample that would normally be taken wasn't feasible). The dental team then made a ‘dental map’ of each body, and the bodies were carefully examined for unique features.

In the meantime, David was back in the UK; he had been appointed national coordinator and a casualty bureau had been set up at Hendon to deal with reports of missing people (which varied from specific, reliable reports to more vague reports). Each report was investigated and eventually 183 people were confirmed missing from the UK.

Family liaison officers were deployed to keep families informed. Forensic reference samples and details of dentists etc. were obtained. Reference sets of prints were taken in a targeted manner from places likely to only have the missing person’s prints – bedside tables, cheques etc. DNA samples were obtained from hairbrushes, earrings, and even histology or other medical samples that had been retained. Familial DNA samples were taken from parents.

All samples were collected and sent to Hendon, and then sent on to Thailand for cross-matching at a unit that had been set up there. Over 2,000 officers rotated out there.

Once a body had been ID’d, a death certificate could be signed and release papers given, allowing the body to be sent out to the relevant country. For the UK, all bodies were sent – for practical/logistical reasons – to Heathrow, where a forensic team carefully reviewed the paperwork and a coroner went through the ID data. Lots of checks and balances were made along the way as it was essential that no-one was mis-identified. After much detection and hard work, bodies were finally released to the families (along with the valuables), allowing the deceased to be finally laid to rest and the families to have closure.

Thanks to the efforts of David and his team nearly all of the bodies were identified. The work was difficult, traumatic, but essential – and hearing the complexity of it all against the backdrop of a disaster situation made us appreciate how big and challenging a task it had been.