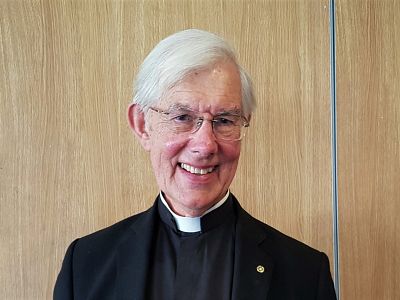 There seems to be lots of ‘change’ recently, ranging from the weather to political change. As such, it was appropriate for the Dean of Canterbury to come and talk to our members last week on “Change and Continuity.”

The Very Revd Dr Robert Willis is the 39th Dean of Canterbury since the Reformation. As well as being a Freeman of the City of Canterbury, the Dean is an honorary Doctor of Divinity of Yale University and Doctor of Civil Law of the University of Kent.

During his talk the Dean first expressed his delight at visiting the Cricket Ground (where our Club holds most of its meetings) and spoke of his last visit to the ground when he took part in a multi-faith service. Influenced no doubt by the room and the view of the grounds, he went on to speak briefly of cricket – mentioning the Archbishop of Canterbury’s Team and the Pope’s “Vatican XI” team. The latter, it seems, have members of many nationalities, not just Italians! He also gave a brief anecdote about Colin Cowdrey (the famous Kent and England cricketer, after whom a Stand is named at the Canterbury ground). Without going into detail here, it seems there’s a humorous Latin plaque marking a situation that Cowdrey found himself in during a visit to King’s School.

Well used to public speaking, the Dean then went on to speak on his themes for the day in his characteristic, calm and measured voice. He started by speaking of change – something he said that Canterbury and the Cathedral is not unfamiliar with.

The Cathedral goes back to 597 AD (during the time of St Augustine, Canterbury’s first Archbishop) and has seen many changes in its time, in both its environment and structure. St Augustine bought with him illustrated Gospels from Tuscany and, demonstrating continuity despite immense historical and societal changes, these are still used in the enthronement ceremony for the Archbishop of Canterbury. Showing scenes such as the Last Supper in a ‘cartoon-like’ format, these Gospels are said to be “the oldest above ground artefacts in use in England”. (Most recently, these Gospels were used for the enthronement of Justin Welby.)

Despite times of change and conflict, the Dean stated that “continuity is in the life blood of Canterbury”. Again, he had a historical reference to illustrate his theme – this time referring to the three famous crow-like black ‘choughs’ portrayed in Canterbury’s coat of arms which originated from the heraldry of Archbishop Thomas Becket, who was killed in the Martyrdom of the Cathedral.

The Dean has also seen many changes during his own 18-year span as Dean – during this time he has worked with Archbishops Justin Welby and Rowan Williams. He spoke of the many portraits of former Deans in the Deanery and told us how looking at these portraits reminds him of the passing on of a sacred responsibility from one Dean to the next. But yet again, despite this continuity, things change and the Dean now happily welcomes “people of all faiths all denominations, all faiths and none” to the building.

Currently, the Cathedral is undergoing change as a result of building works. As the Dean mused, there is so much scaffolding in some parts that people might be reminded of the Pompidou Centre in Paris! And, despite this, there is continuity. Every hour the workmen stop work to allow the Chaplain to say prayers – a time when the building becomes utterly silent.

The roof of the Cathedral itself is also a testament to change and continuity – the rafters have been repaired, while dendrochronologists have studied the wood to date the trees and say where the old rafters originated. Lead has also been removed – “but not one bit of lead has been wasted”.

The Dean spoke of a recent visit to the Cathedral by the Lord Mayor of Canterbury accompanied by Mayors of Kent. One Mayor was a builder; he knew the Cathedral from his childhood and was curious about the stonework. Again, symbolising change and continuity, the Mayor was put in touch with a Master Mason who still carried out the ancient stone-craft.

The Dean described Canterbury as a city that, over the years, has acted as “host to people coming for a multitude of reasons” and a city that embraces change. Cultural exchanges can help break down barriers; to illustrate this the Dean referred to a beautiful magnolia tree (currently in full bloom) that came decades ago to Canterbury from a temple in Japan. Meanwhile, copies of the Cathedral’s famous “Bible windows” are currently being used to teach in Dallas, Texas. “Some things,” the Dean mused, “are very expensive but of no value except to the human soul”.

In 1942 bombs rained down on Canterbury. Several buildings were damaged in the Luftwaffe raid but, defiantly marking continuity and reassuring the locals, the Bell Harry continued to chime. This anecdote, one supposes, was being used by the Dean to emphasise Canterbury’s resilience and its ability to embrace change while, as appropriate for a historic City, at the same time maintaining continuity.

At the end of the Dean’s talk President Margaret Griffin presented him with a badge to mark his honorary membership of our Club.