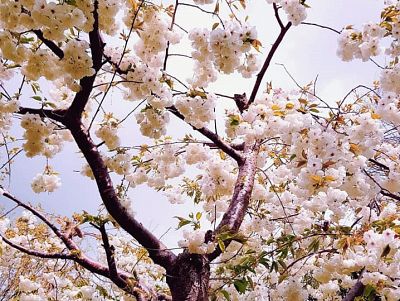 Our Members may have felt as if they were visiting another world while fellow Member Deborah Connolly talked to them about cherry blossom in Japan, showing pictures from when she visited the country during cherry blossom season.

The Japanese have a name for their ornamental cherry blossom - "Sakura". Rotarian Deborah Connolly and her husband Geoff had the pleasure of visiting Japan during Sakura season, and shared their pretty blossom-filled pictures and insight with our Members.

Deborah and Geoff were lucky to arrive in Japan at peak flowering, with bunches of blossom all over the cherry blossom trees. While there, they learned that cherry blossom is a very important symbol in Japan, where the locals celebrate "Hanami" - cherry blossom viewing - every year. The blossom, which is Japan's national flower, is associated with life, death and renewal and is celebrated for its beauty and meaning. Japanese families gather with friends and family to celebrate renewed optimism in springtime, sitting in parks with picnics under blossom-laden trees.

Each year, the Japanese publish forecast maps which predict flowering times across the different islands of Japan. In the south, which is warmer, the blossom appears in mid-March - while in the north, such as on the Island of Hokkaido, the blossom comes out in mid-May. Despite these forecasts, however, the exact time at which the flowers will blossom is hard to predict as it depends on many other factors, including weather conditions and levels of rainfall.

The blossom itself only lasts around two weeks, with peak flowering lasting just a few days. Therefore, it's no surprise to know that the blossom is used as a metaphor for "fleeting" life. Deborah shared with us an extract from a poem by Japanese Vice Admiral O–nishi Takijirˉo:

Tomorrow scattered by the wind."

However, cherry blossom can also be symbolic of death. In World War II Japanese pilots painted cherry blossom on their planes before kamikaze missions; the following words were written by a kamikaze pilot before his mission:

To illustrate the association between blossom and fighter pilot, Deborah showed us a picture of a pilot taking cherry blossom into the plane with him.

We learned from Deborah that Japan has around 10 native species of cherry blossom trees, planted all over the country; even the Samurai, it seems, loved cherry blossom. However, over the years many older species have been lost.

Deborah went on to tell us about Kent's very own link to Japanese cherry blossom - through an eccentric gentleman called Collingwood Ingram. Born in the 1880s, Ingram was brought up at Westgate-on-Sea. It seems he was a rather sickly child, but he grew to love the countryside and eventually became an ornithologist. He later married and moved to Benenden in Kent. Despite being a poorly child, Ingram actually lived until he reached 100!

Ingram had travelled a lot when young, including to Japan. He learned about the loss of Japanese cherry blossom trees - something he was very concerned about. Ingram therefore started to grow rare varieties in his own garden. He subsequently even managed to re-introduce one variety to Japan; this close association with the flower has led to his widely used nickname - "Cherry" Ingram. (Those who want to know more about him might like to know there is a book about his life.)

Deborah carried on with our "virtual" visit to Japan, showing pictures of families in a large park in Tokyo, sitting on little "plots" and enjoying time together. Such gatherings are very much a social event - more so because the time coincides with the start of the new school year and the new calendar (so, again, reflecting it as a symbol of renewal). It seems that people go early to get a good space, armed with picnic baskets, bento boxes and saki to share with their friends and family.

Other parks (such as one at Osaka Castle), we were told, were more informal - but the picture was still one of families, sunshine, blossom and trees.

In the late evening there is a totally different experience to be had - "Yozakura", or viewing illuminated blossoms at night. Deborah showed a lovely picture of a bridge in Kyoto, which large crowds go to see. We also saw a picture of Kanazawa, where blossom trees could be seen reflected in the water - another lucky symbol.

We were told that in 1912 the Mayor of Tokyo City gifted 3,000 cherry blossom trees to the city of Washington to celebrate friendship. (A National Cherry Blossom Festival is usually held in spring in Washington to mark this.) But Deborah also described seeing blossom in an Island off Hiroshima and at the Peace Memorial Park in Hiroshima (near the epicentre where the nuclear bomb dropped during World War II and killed so many).

Deborah certainly painted a picture of how cherry blossom had so much symbolism and meaning for the people of Japan and all who love Japaese culture.

Fotunately, in Kent we have also been able to celebrate cherry blossom in normal springtime - at Brogdale in Faversham, where visitors have been able to book a Hanami blossom picnic as part of Brogdale's Hanami Festival.