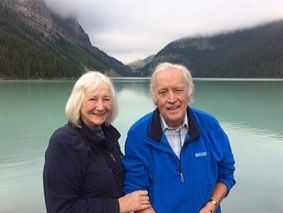 We are pleased to announce that Dee Mepstead has been inducted into our club - and as her husband is already a Member together they become our Club's first Rotarian couple!

Much of Dee's life has been spent helping others, so undoubtedly she will fit in well with our club.

Dee originally trained as a nurse in her home town of Newcastle and as a midwife in London prior to going out to Zambia for three years to nurse. As a children’s ward sister in a government hospital she saw at first hand the problems facing developing countries. The children mainly suffered from preventable diseases, malnutrition was widespread and the mortality rate high. She decided that when she returned to England she would study to learn how to prevent people becoming ill, and was fortunate on her return to get sponsorship to undertake her health visiting education.

Subsequently Dee married and had two children. While the children were young the family travelled and lived in Jordan, Libya and Swaziland. But eventually they returned to England so that the children could put down roots and access the British education system.

Dee returned to work as a health visitor while her children were growing up and continued her education on a largely part-time basis. During this time she completed a social science degree, a postgraduate teaching certificate (full time) and a master's in community nursing practice.

She juggled family commitments with study, working part-time as a health visitor and eventually teaching part–time at the Institute of Advanced Nursing (IANE) at the Royal College of Nursing (RCN). Using the data from her master’s dissertation she was able to set up a young mother’s club (for teenage single mothers) to fill a community need in South West London.

When her youngest child went to University, Dee came to work as a senior lecturer at Canterbury Christ Church University where she worked until her retirement. She was (and still is) particularly interested in the practice of public health, government policy and the impact it has on health and social care and the work of practitioners.

Since Dee's retirement she has married again, served a three year term as elected governor of East Kent Hospitals and tried a number of the hobbies and activities which she promised herself she would have time for one day! Alan and Dee both like to travel and they have managed to fit in a number of interesting, enjoyable holidays.

Alan and Dee have four children and five grandchildren between them and like to spend as much time with them as possible.