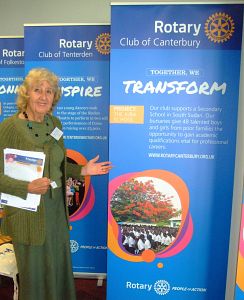 ‘Engage’ was the title of this year’s District Conference, and Engage is certainly what around 350 attendees - including Members from various Clubs in the District - got to do over the weekend!

This year the Conference was held at Canterbury, hosted by our sister club The Rotary Club of Canterbury Sunrise, and was based at the University of Kent at Canterbury. It was a great opportunity for people from outside Canterbury to see our lovely city and learn about its unique history.

Registration started on Friday 7 September – although on the previous evening there was a golf tournament at Boughton Gold Club. The Conference ‘proper’ kicked off with its first session that included a talk by author, historian and TV personality David Starkey, followed in the evening by a wonderful Proms-style concert in the Colyer-Ferguson Hall at the University. Many of those who attended the sell-out event found the Kent Sinfonia really riveting.

David Starkey, as ever, was forthright in his views. He maintained that Winston Churchill’s view of life came from the period he spent writing about his forebear John Churchill, the 1st Duke of Marlborough. Winston’s research had highlighted the characteristics shared by dangerous leaders, so early on he had identified Hitler as such and later Joseph Stalin as well. David said he despaired of current political leaders, stating there was no one of stature – although Jacob Rees Mogg keeps on telling people he is!

Visitors to the Conference were met with a bright and inspiring ‘wall’ of pop-ups from various Rotary Clubs in the District (including our own) - telling people about interesting projects and fantastic fundraising ideas. Our pop-up focussed on the Juba school project, which is one of our President’s three selected causes that we will be supporting this year (among the many other local and international causes that we also support, of course).

There was also a book containing 50 or so ‘event sheets’, with each club describing how to organise a project that had been successful for them; these are to be used as a source book so other clubs can ‘go out and Engage’ . Two or three of these will be given to each Club, updated as a resource.

On Saturday, the guest speaker was Penny Mallory, speaking in the Woolf Theatre. Penny, a Channel 4 presenter, author and motivational speaker, was the first woman in the world to compete in a World Rally Car. Her talk was fascinating, with her recounting difficult times in her teens when her mother died and her father battled alcoholism. Penny ran away from home to London at the young age 14 and her life seemed to be spiralling downwards until a chance event got her engaged with rally car driving – and from then she was hooked. Penny made the interesting comment: “If you’re risk averse, you’re stuck where you are!” It turns out that Penny isn’t, rating herself at a 14 on a scale used by sports people where most people say they are 6 or 7!

Penny's talk was followed by an excellent breakout session with Penny and Porchlight, during which Rotarians explored the question: “What does it take to inspire people to break their cycle of homelessness?”

The afternoon had attendees taking part in a wide variety of organised activities around Canterbury – including our Annual Duck Race at Westgate Gardens. There, we held a race-within-a-race among green-stickered yellow ducks sponsored by District clubs, with the winning club (Maidstone Dawn Patrol) receiving 20% of the race income. President Margaret Griffin handed over a cheque over the weekend.

That evening there was a drinks reception in Rutherford College with a live steel band – setting the atmosphere for a Caribbean / Hawaiian themed Gala Dinner (with dancing to ‘Rubber Biscuit’) that went on until late.

On Sunday there was a service held in Canterbury Cathedral for those who wished to attend, followed by session three with speaker Paul Craven.

Behavioural Economist Paul Craven is a mentor to businesses and demonstrates ‘Tricks of the Mind’. He reported research in which patients were offered one of two different treatments: one 30% effective, the other 80% effective. Patients were given either a positive or a negative story about one treatment and were also given details of effectiveness. Showing how we relate better to the human story, many patients chose the treatment with a positive story, even though they knew that treatment was less effective!

A last-munute substitute speaker, stepping in at short notice, was the self-proclaimed "Weird Fish Lady" - Gloria Barnett, of the Rotary Club of Canterbury Sunrise. We'd describe her as an Ocean Adventurer - she  enthralled us with her underwater films and spoke about the lurking dangers of plastic in our oceans today. All-in-all a very persuasive speaker.

The weekend’s final event was a post-Conference lunch held in Rutherford. Speakers included the District Governor and the President of the UK Rotary Organisation RIBI – who called on attendee Rotarians to “Go out and be part of your community, Engage!”

Other speakers over the weekend included Jane Walker, a British woman who offers hope to children that work on huge rubbish dumps in the Philippines. With Jane’s help these youngsters are receiving an education, and even ballet classes. During her talk, Jane recounted her experiences of narrow alleys on the margins of the rubbish dumps where desperate families live in flimsy shacks. It was sad to hear that some had lived this life for 40 years - the approximate life expectancy there. On working out there, Jane said: "We all take risks with our health - everyone gets sick." Jane has been getting big Filipino businesses involved in the education programmes she started and has helped set up income streams (mending mobile phones, recycling, etc). She also set up a school in the dump. She showed how the people there can sort and use the rubbish – processing plastic bottles and drink cans (the latter for the aluminium), AND making high fashion bags out of the ring pulls of cans. It certainly seems she has the vision and determination to change lives.

There was also a talk from charity Canine Partners and a visit from the ‘Punk’ Vicar from Wye.

Visitors could wander around the stalls and mingle (‘Engage’) with one another. While doing this PP Richard Kemball-Cook, for example, met an ex-geologist who, Richard claimed, was a wonderful example of how someone could put a lifetime’s worth of experience into services that have a huge impact. Having dealt with maps during his career as a geologist, he was able to help disaster relief the agencies plan logistics. This is vital in some of the areas worst hit areas by disasters, when people need to make the best of any infrastructure that has survived. The geologist flies out small teams to disaster areas and produces on-the-spot detailed maps that allow disaster relief campaigns to get underway. He described how operations have military precision – with maps being essential to them. Remarkably, the geologist said he ‘packs everything is in just one suitcase’ – including a huge mapping database and an A3 printer!

Overall 'Engage' was a great weekend - we were delighted that the Annual Conference was held in our District, in our City and in our University! Now we look forward to the Rotary International Convention in HAMBURG during 1-5 June 2019. See you there!