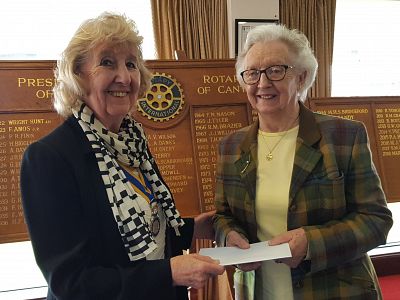 It is with great pleasure that we inform you that we donated £500 to the Canterbury Branch of Parkinson's UK.

June Bushell, the Treasurer of the Canterbury Branch of Parkinson's UK, attended our meeting today to accept the cheque from President Margaret Griffin and thank us in person. The funds will go towards paying for physiotherapy sessions for their clients. The money was awarded by our Community Services Committee and June attended our meeting as an invited guest of Rtn Bob Anderson.

Parkinson's is a progressive neurological condition caused by a lack of a chemical called dopamine; it can affect people of all types of backgrounds, including young people. Parkinson's UK states on its website that "the number of people diagnosed with Parkinson's in the UK is about 145,000. That's around 1 adult in every 350."  Physiotherapy can help some people with Parkinson’s that have problems with everyday movements that most of us take for granted, such as walking - or even getting out of bed.

Find out more about Parkinson's here.

And here is a link to a video about the condition on the website of Parkinson's UK.