Donation to Pilgrims Hospices - just in time for Christmas! 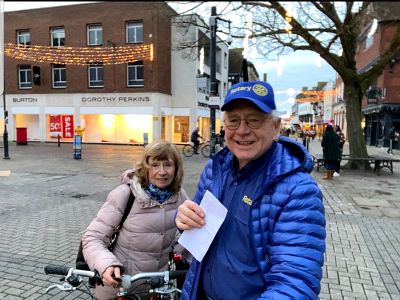 It was just in time for Christmas that Past President Richard Kemball-Cook and his wife Cora cycled through our city's streets (pre-lockdown whilst doing their daily exercise) at the end of one day to deliver the last of our pre-Christmas donations.

We've already posted stories of our donations to Canterbury Food Bank, Porchlight, The Salvation Army, The Prince of Wales Youth Club and Rising Sun. Below, Richard, who is currently our Club's Treasurer, gives his own short account and mentions our final donation to Pilgrims Hospices.

"We were carrying cheques for well over £3,000 to be given out to six wonderful charities hard at work preparing gifts of food and presents to be given to those in our city who are finding times hard. Cora & I felt a little like St Nicholas/Santa Claus while giving out the donations.

All of the money had been raised from Members of our Club who had been putting money aside to pay for their lunches; due to Covid-19 our usual weekly meetings were cancelled, so the money had collected up. It was the Club Members who decided where their money should go - the main beneficiaries being the city's children. Almost £700 went to both the Rising Sun for their children’s groups and the award-winning Prince of Wales Youth Club, and a further £400 was for the Salvation Army. There were also donations for Canterbury Food Bank, Porchlight and the Salvation Army. Last but not least on our cycle trip was our delivery to Pilgrims Hospices at their base in London Road.

It’s one of the great things about being Treasurer that you’re the one who gives the money out. It’s usually money that has been raised by our fundraising events and activities but this time, thanks to the generosity of Members, we have been able to donate unspent dining amount to some of our usual good causes. In the meantime we've been having thrifty lunches (bread and cheese for some of us); as we haven’t been able to meet up for over nine months this has been the biggest “thrift” lunch ever!

As we arrived bearing our cheques, Cora and I could see the work going on at some of the charities - at the Prince of Wales Youth Club, for instance, rows of bags were being readied on long tables: in effect this was the Club's gifts going straight out again into the community."

You can find out more about Pilgrim Hospices or donate to them here.