Donation to Canterbury and District Recorder 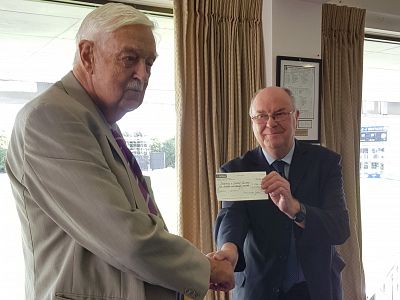 Canterbury and District Recorder does a much-valued job in helping the visually impaired keep abreast of local news, so it was a great pleasure for us to hand over a cheque for £520 to their Chair, Derek Fowler.

The cheque was handed over by the Chair of our Community Service Committee, PP David Barton. For those that are unfamiliar with the service, the Canterbury and District Recorder is, in effect, a talking newspaper. Each week volunteers (including Rotarian Marjorie Lyle) record around 90 minutes of news from the Kentish Gazette and the Canterbury Times onto USB sticks that are then distributed to the visually impaired - over 200 members at present. The relationship with the Gazette and the Kent Messenger Group has been longstanding, with current Chairman Geraldine Allinson a Patron of the Canterbury and District Recorder.

The talking newspaper has existed since 1965, when Founder Dennis Eldridge, who was suffering from increased loss of sight, asked his wife to record the local news for him on audiotape so he could listen at a convenient time. Technology has changed quite a bit since then; in 2010 the switch was made from cassettes to the digital format that is now provided on the USB sticks. The production and distribution team includes a range of volunteers: News Editors, Readers, Sound Engineers, USB Stick Copiers and Mail Administrators - all overseen by their Trustees. At present the service is based at the Salvation Army Centre at Canterbury.

We had heard that the service was in need of new sound equipment, so the cheque was given to support this. Derek thanked us for the donation, telling us of the 'black ears' their sound engineers had been suffering thanks to disintegrating headphones that were almost a decade old! He re-iterated the closeness of our two organizations and stated his "hope that this support will continue for many years to come". (Our history with the Recorder goes back to its early days when we provided financial assistance - and in 2013 our Club gave Derek an award for his service to the Canterbury and District Recorder, especially for the introduction of digital technology. The late Victor Banks, one of our PPs, also gave his time and knowledge to the Recorder, being the proprietor of a photographic and audio-visual business in Canterbury.)

The Recorder's weekly service is provided in Canterbury and the surrounding area and is completely free; the USB players are also provided free of charge. In 2006 the Recorder received the Queen's Award for Voluntary Service and in 2010 the group received the Lord Mayor's Award.

For further information about the recorder please visit its website. If you know someone who would enjoy keeping in touch with local news and information please contact support@canterburyrecorder.org.uk

Picture: PP and Chair of our Community Services Committee David Barton hands over the cheque to Derek Fowler from the Canterbury and District Recorder. Picture credit: Richard Kemball-Cook/Rotary Club of Canterbury.