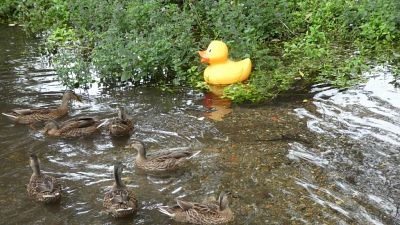 It seems that Mama Duck was not done with her fundraising efforts following the duck race a few weeks ago. Thanks to coordination by Rotarian Bob Anderson, members of the club put forward names for the duck at a pound a go and raised £88 for President Sharon Jordan's charities (her two main ones for her Presidential year being  the SCAT Bone Cancer Trust and the Kent, Surrey & Sussex Air Ambulance). The winning name, chosen by the President, was 'Mrs Aylesbury' and was suggeted by Rotarian Mike Talbot. Other suggestions were 'Jemima PuddleDuck', 'Ducktor Who', 'Ro(ta)duck', 'Charity', 'Broody' and 'Lady Quacka'. Well done to all who took part!