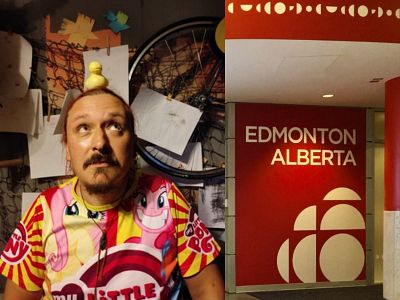 One of Members was interviewed briefly by Liam Harrap (journalist from the Canadian Broadcasting Corporation and former contestant in the Great Canadian Baking Show) the other day about our Duck Race....

Much as we would love to think that people from Canada are interested in our Duck Race that's taking place this Sunday, the interview was actually about the tiny part that we played in trying to find the origins of little Duck No. 1417 found in Russia by Vladimir Matusevitch that we wrote about the other day. (Which means news of our race also got to Russia - oh, the wonders of social media! See picture for a photo of Vladimir and the duck!)

The ducks that swim in our current race look very different to the one found - but at the time the duck was found we did wonder if it was from one of our previous races, given that the duck races have been going on in Canterbury for around 20 years. In the end we decided it wasn't one of ours...but it's amazing to think it MIGHT be one that started in a duck race in Canada, We haven't counted the exact miles, but that's a long way to swim!

Of course, some of you may recall that one of our own ducks WAS once in Canada. Though he was a bit more sophisticated and went by air!