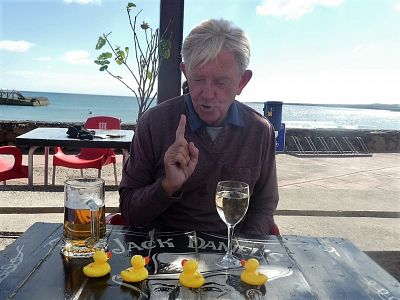 Inspired by the build up to the Winter Olympics, some of our young Canterbury Annual Duck Race hopefuls set off to Lanzarote recently for some winter swim training. There, they were put through their paces by their personal trainer and coach, Mike Talbot.

Mike, a former winner of Canterbury Bowls Club's Centenary Cup and thus an experienced and well-disciplined sportsman himself, is also a Rotarian in his spare time.

The ducks were taught how to ride the crest of a wave and told the sky’s the limit. One of the ducks had to be rescued however, and a few feathers were certainly ruffled during the desalination shower. Day 1 of training proved tough, so Mike may need to relax the regime to maintain their confidence! But at least he ensured they stuck to a protein-filled diet in the form of a few garlic prawns. They were, of course, told that alcohol is strictly off-limits while they do their training.