Duck travels: At the yoga studio 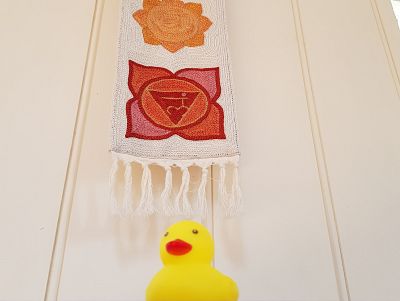 After reading earlier in the year that an Olympic swimmer and medallist does yoga, one of our younger ducks decided to learn more about the practice by visiting a yoga studio in Canterbury run by PP Richard Kemball-Cook's wife, Cora.

Yoga originated in India but is now done as a form of excercise or relaxation by people - and perhaps ducks - all around the world. So after reading up about yoga our duck went to find out more...

She'd read that yoga can help increase flexibility and improve breathing, both of which she felt would help her in the Duck Race, to be held in Canterbury's Westagate Gardens on 15th September. She'd learned about the seven chakras. The root chakra, symbolised by the colour red, helps one become 'grounded' - but our duck wasn't convinced that was quite right one for her as 'grounding' was the last thing she would want to do during the race!

She'd also read that there are a lot of poses or asanas that can be done, many of which are named after animals. Our duck thought the Fish pose sounded - well, a little 'fishy'. She wasn't sure if Cat and Dog poses were 'fur' her 'eider''. Pigeon, Eagle, Peacock and Crow poses sounded 'caw'-some, but might be a bit of a stretch. In the end, having been raised on lots of fairy stories when younger, our duckling decided she liked the sound of becoming a swan!

The Rotary Club of Canterbury Duck Race will be held in Westgate Gardens, Canterbury on Sunday 15th September. Look out for details of how you can sponsor a duck beforehand - we'll publish that here on our web site, Facebook page and Twitter.

Picture: Our duck mulls over the yoga chakras in the studio in Canterbury. Picture credit: Rotary Club of Canterbury.