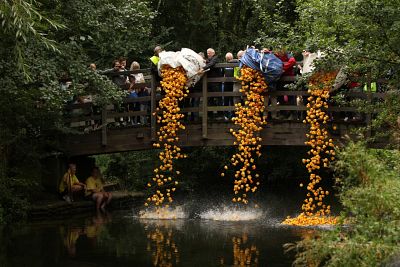 Absolutely quackers! That was the verdict as the annual charity duck race broke all previous records on Sunday.

Canterbury Rotary Club, which puts on the popular fund raiser in the Westgate gardens, sold all of its 3,500 plastic ducks, with £6,000 raised for good causes.

An estimated 1,000 people lined the banks of the Stour as the yellow flotilla started its journey down towards the finishing line near Tower House.

Article re-printed with the kind permission of the Kentish Gazette 22/09/16
photos by John Gichigi & Roger Bickerton. Click or tap images to enlarge

Families cheered on their ducks as members of the East Kent School of Lifesaving took to the water to ensure fair play and safety.

First across the finishing line was a duck bought for four -year old Sam Cardell by his mum Claire. The 40 year old, of Military Road, Canterbury, who is a P&O steward, said: "In all the noise and excitement, we didn't hear our number read out and Sam was quite upset when I told him I didn't think he had won. But the following day I got a phone call to say his duck was first and he had won £250, which is fantastic. I think Sam will get a treat, but I will put most of the money away safe for him".

The second duck across the line was bought by Carol Skinner, who won £100, with Alan Newton picking up £50 for third - and generously handing it back for Rotary Charities.

The contest for the corporate-sponsored duck was neck and neck on the line so organisers decided to award both Fire Protection Online and Canterbury Auction Galleries with a prize of champagne.

Rotary president Martin Ward said:"It was great to see such a huge turnout. We have never sold out of ducks before, so we even had disappointed families who couldn't enter. We plan to provide more next year so everyone gets a chance. We were also delighted to get 100 corporate entries, which was a first. It was also the biggest sum we have ever raised from the event, which is fantastic and we would like to thank everyone who supported the race and made donations".