Our ducks have done it again! 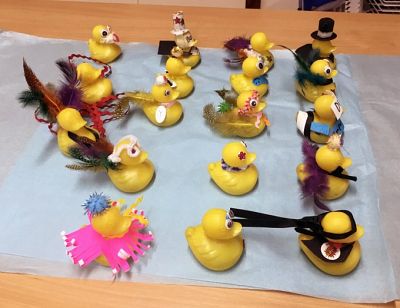 We are delighted to report that our ducks helped Junior King's School raise funds for their Children in Need fundraiser, as well as helping to give the youngsters a bit of fun too last November.

Before Christmas we reported how our ducks helped the Parent Teacher Association of Saltwood School in Hythe raise funds for their mobile classrooms, and it's a great pleasure to report here how the ducks have helped another local school with its fundraising efforts, this time Junior King's, Canterbury.

Ed Stevenson (Head of Year 8 and Boys' Houseparent) had asked if we could lend them a few ducks - and we were happy to oblige. (As regular reader's will know, we weren't able to hold our own Duck Race last summer due to Covid-19 restrictions).

The school held a variety of activities to support Children in Need with their Duck Race being held on Friday 13th November (lucky for some!)

Ed told us that the races were organised in two slots - the year sevens had three races (77 pupils) then the year eights had four races (66 pupils). These were done in a knockout type format ... with the first 40 ducks across the line through to next round etc.! All the races were held in the school grounds, along the River Stour - we're sure the youngsters had fun cheering on their decorated ducks.

Each child payed £5 to go to school in non-uniform and enjoy an afternoon of racing! The staff also backed some ducks.

We were delighted to hear that the school raised over £600 from the duck race; that money was combined with other fundraising activities on the day for different year groups for Children in Need, with over £2,300 raised in total! Well done!

To read more about Junior King's Canterbury's Children in Need fundraising, see the article on their website here.

Picture: some of the charmingly dec(DUCK)orated ducks designed by some of the youngsters. Picture credit: Ed Stevenson/Junior King's, Canterbury.